Divers pull loads of trash from the St. Joseph during annual Ecology Dive 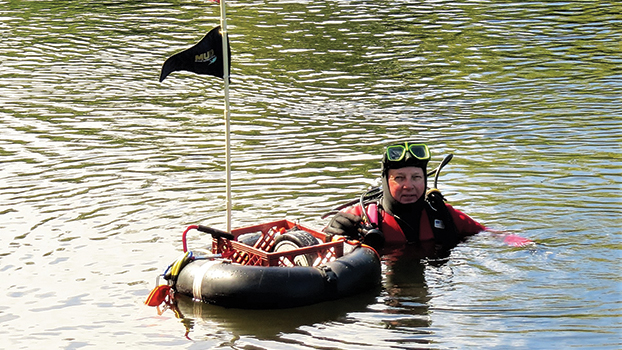 A diver searched the St. Joseph River for trash and debris during an Ecology Dive Saturday. (Submitted photo)

NILES — Divers plunged into the St. Joseph Sept. 22 with the goal of removing trash and debris during their annual Ecology Dive.

The event was hosted by the Michigan Underwater Divers Club and Wolfs Marine. There were 24 divers, including two from Detroit and one from Grand Rapids, as well as volunteer shore supporters and a number of spectators.

“The weather was beautiful but a little chilly in the morning until the sun warmed things up in the afternoon,” said Donald McAlhany, the spokesperson for the Michigan Underwater Divers Club.

Following the dive, awards are distributed to volunteers based on their finds. This year, McAlhany said every participant was awarded a prize. Jim Scholz won Most Trash after he removed 73 countable items from the river. Mary Beth Thar won the Largest/ Biggest by hauling in a large rusted sign and a big tractor trailer tire rim. Skyler Daisy won heaviest by lugging in a very heavy and rusted grate, and last but not least was Darrin Jillison won the Most Unusual with a small cross pendant surrounded by about a hundred or so diamond chips.