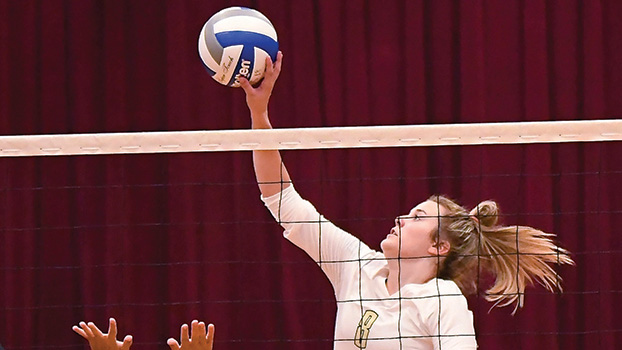 “It was the best we’ve played all season,” said Brandywine coach Janet Markunas. “We’ve been really working on minimizing our unforced errors and that’s exactly what happened tonight. We were just really in sync tonight. In offense, defense, serving, and serve receive.”

Bethan Duval continues to enjoy a standout season as she finished with 16 kills, four blocks, nine digs and three aces.

The Bobcats will face a big test across town Monday night when they take on Niles, which was swept by No. 1-ranked Mattawan Wednesday in SMAC West Division play.

“My team came into tonight with the mindset of battling to dominate a point and a single play at a time,” said Niles coach Jenny Nate. “Our goals at practice the past week were to communicate better, play with aggressive confidence, improve team chemistry, and bring more intense energy to the court. We accomplished that tonight. I’m incredibly proud of the way they battled the powerhouse and never let up.”

Abbie Harpenau led Niles with eight kills, while she also had four blocks.

Megan Adkerson had 13 kills and eight digs for Buchanan, which also got five kills, 12 digs and 10 assists from Katie Schau.