Students participate in camp to keep them safe 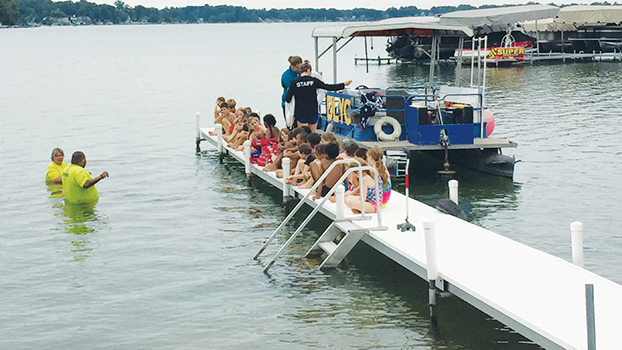 CASSOPOLIS — In the lake near the Diamond Lake Yacht Club last Thursday, two instructors from the YMCA of Southwest Michigan stood in the water wearing yellow fluorescent shirts, while they instructed students from Sam Adams Elementary School on how to become better swimmers.

The students sat on a white pier antsy and nervous because they knew they were going to soon have to jump into the chilly water.

They took turns hopping off the pier with red life jackets on and practicing their back float for about 40 feet. An instructor walked alongside them and told them to hold their life jacket like “peanut butter and jelly” and “give it a big hug.”

Once they reached the pier steps, they climbed out of the lake and awaited further instruction.

“Be very careful,” said Sherri Critzer. “The steps are slippery.”

On the shore, a plastic container of dry towels waited for the students when they were done with their swim lessons. This was all part of an initiative by the YMCA of Southwest Michigan to make sure that Cassopolis children know how to swim, a skill that Samee Schaller, the aquatics director at the YMCA, says is vital to growing up in Michigan.

“I think it’s important because kids need to know water safety and some of these kids financially are not able to take swim lessons,” Schaller said. “Living in Michigan there are so many lakes, so many bodies of water. We ask the kids at the beginning how many of you have been to a pool party, a lake or a beach and every single one of them raised their hand.”

This is the fifth year of the Cass Swim Camp, and all three fourth grade classes at Sam Adams Elementary School participate at no cost to the students. Money for the camp comes from donors throughout the community. Schaller said this fundraising effort is usually led by Diamond Lake resident Tom Schwartz.

Most of the lessons take place in a pool, but Schaller said that there are different safety precautions the students should take in both a pool and an open body of water, so it’s important to give them instruction in both.

A student’s ability to swim varies across all three classes. Students rate themselves on how strong of a swimmer they are, but the goal is for all of them to improve over the course of the swim camp. These are skills that can keep the students safe and potentially even save their lives.

On Saturday, an 11-year-old male was found lying in the bottom of pool at a party in Howard Township. Parents on the scene immediately started performing CPR on him, and he was transported to Lakeland Hospital in Niles, where he was pronounced deceased.

The case remains under investigation, but officers believe it to be an accident swim classes are designed to prevent similar accidents from occuring.

On Monday, students at Sam Adams Elementary School were scheduled to go through their post assessment for the Cass Swim Camp. The student and instructors rate each student’s overall improvement, which Schaller says is typically substantial.

“Every single year there has been progress,” she said. “Some kids within a week will improve overall by 40 to 50 percent. From where they are at, from the beginning to the end, and all that takes is just some structured teaching for the kids.”