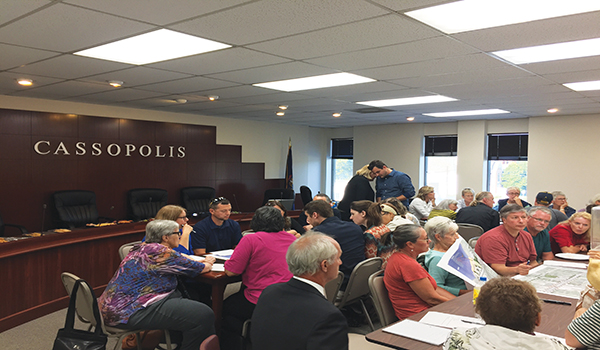 CASSOPOLIS — With all three rounds of Imagine Cass complete, more than 40 people gathered on Wednesday, Aug. 22, in the Cassopolis Village Council Chambers at 117 S. Broadway to discuss the town and county’s future and deliberate on how to put ideas into action.

It is now up to the village and its residents to carry on the innovative design concepts discussed throughout the Imagine Cass process, decide which ones are worth implementing, what areas of the town should be renovated and make a plan to fund those projects.

Imagine Cass has been a collaboration between the village of Cassopolis, Cass County and Michigan State University to revitalize the heart of the county in Cassopolis’ downtown corridor. Both village leaders and the Cass County Board of Commissioners have expressed confidence in the project.

The Master Planning Panel Discussions that took place last Wednesday was the first step in the next phase of the process.

“There is nothing on here that says imagine Cass,” said Emilie Sarratore, the village manager at the beginning of the discussion. “One of the things to remember is that the initiative that we were working on is phenomenal, and it really focuses on streetscape of our downtown and our downtown corridor.

At the panel discussion, Jorden Parker, an architect from Wightman and Associates who has been working with the village, presented plans for three areas of Cassopolis that he and the village believe are worth investing in significantly: a beach and recreation area off of Disbrow Street, a Stone Lake Residential Development and the Broadway Streetscape.

He said that the purpose of the discussion was to gather feedback from the community as the village continues to develop its master plan. They also intend to meet with the planning commission, the county and hold a public hearing in order to continue to shape and mold the plan.

The first area he spoke about was the proposed beach off of Disbrow Street, near the Tasty Twirl.

“We have a very underutilized opportunity at this frontage along Stone Lake,” Parker said. “What we wanted to think about is what could anchor downtown Cassopolis for a long time as a public amenity that could drive events and be a catalyst for new growth.”

The plan depicted sandy beaches; a promenade with benches, trees and a terraced event space and a public area for fishing, walking, sitting and boat slips. He said that parking would also have to be added in order for the area to be successful.

Next, he talked about the downtown streetscape and how it could be transformed by performing a road diet.

“A road diet is taking what you have today as a four-lane road with two lanes going in each direction and reducing that to one lane in each direction and a center turn lane,” He said. “That gives us the opportunity to slow down traffic. When we get that extra lane, we gain six feet on either side of the road, which also gives us a bike lane.”

He said the road diet will naturally slow down vehicles, especially the large trucks that drive through downtown Cassopolis. For this plan, the village would not have to move entire curbs or repaving entire roads.

The plan did not include adding any buildings to Cassopolis since so many of them are currently unused. Instead, it was proposed that the village look at which buildings are worth keeping and updating.

Lastly, Parker touched on the undeveloped Stone Lake Park, which he said presents an opportunity for an affordable housing development.

“We want homes that are affordable for families that are moving into the area, especially those who would be working here,” he said. “We want to see houses that could be built and sold. … We’re looking at fifteen lots.”

Even though these homes would be near the Stone Lake, he said the goal would be to keep waterfront public, so everyone in Cassopolis would still have access to it. He said the waterfront could have a park and boat slips.

Once Parker was done with his presentation, the room was broken up into four groups to discuss the three areas. After about an hour, each group presented on what it did and did not like about the plans, which Parker and the village took note of.

Most groups liked the idea of more boat slips, a public beach, bike lanes and an outdoor event space. On the other hand, some groups were skeptical that a road diet could slow down traffic in downtown Cassopolis and wanted to see a plan for some type of symbol or sign that welcomes visitors.

Parker and Sarratore said that they appreciated all of the feedback.

“Our team [at the village] is very, very committed to making these plans become a reality,” Sarratore said. “This is a project that is three years in the making. We have selectively checked off our boxes to get to this point were at now. The other thing the village has worked really hard on over the past five years is making sure we have the funding in place to do this.”