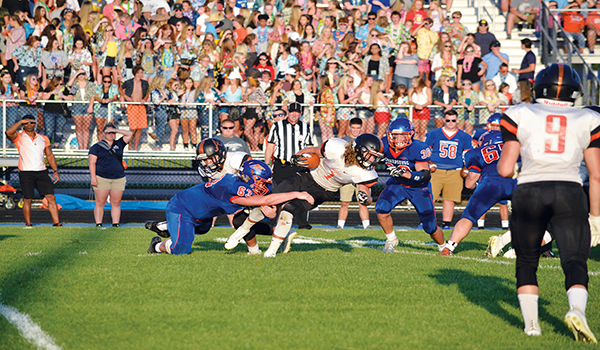 Putting up 42 points in the first half alone, the Eddies offense ended with 389 yards on the night. The powerful force of its defense allowed Allegan only 47 yards on offense.

Add seven quarterback sacks and 40 yards in penalties to those stats and it’s safe to say Edwardsburg is picking up right where it left off.

The state-runner up squad returns eight starters from last year. Head coach Kevin Bartz is especially excited about the quickness and strength of his defense.

“They’re big, they’re strong and they’re quick,” said Bartz. “We have kids that play extremely tough and leave it all on the field, and I really like that drive in them.”

Chase Sager, also a captain and returning starter, had 30 rushing yards and one touchdown for the Eddies. His excitement for this year’s season was evident after the win.

“We have a lot of talent returning this year,” Sager said. “Once we get things put together and really start working together as a team, we will be dangerous.”

Edwardsburg opened the night with two touchdowns in the first quarter. Mitchell drove the first six points in on a five-yard run and kicker Dylan Morley had his first of seven successful PATs at the 7:26 mark. The second touchdown of the quarter came from Mac Gaideski on a 10-yard run, which put the Eddies up 14-0.

In the second quarter, Goggins, Sager and quarterback Tre Harvey all had touchdowns for Edwardsburg. Harvey, the third captain for the Eddies, ended the night 36 rushing yards, one touchdown and 68 passing yards.

Edwardsburg had a 42-0 lead after the first half, which put the Mercy rule into effect for the second half.

Cayden Calhoun opened the third quarter with a 41-yard return, which set up his touchdown two plays later from the seven-yard line. The final touchdown of the night came with 6:47 left in the game when Parker Szlanfucht drove the ball in from the 12-yard line.

Bartz gave his bench ample playing time in the second, something he hopes to see more of this season.

“Anytime these guys get playing time it’s a plus,” Bartz said. “The experience is what we need right now. We still made some mistakes and have a lot of things to improve on. But for the home opener to come out, get a shut out and have very minimal penalties, this is what we were hoping for.”

Edwardsburg will hit the road tonight to take on Otsego at 7 p.m.