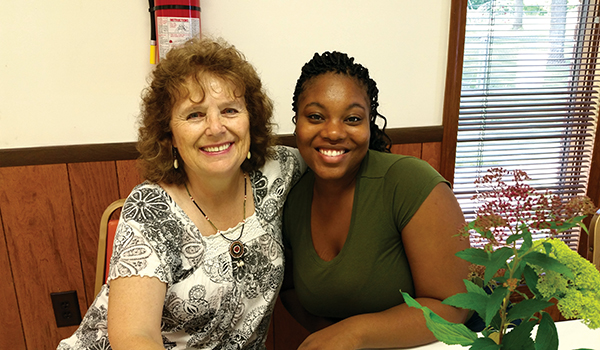 Brenda Beadenkopf and Dorinda Hackworth hang out together. (Submitted photo)

A yearly Juneteenth program, sponsored by the Minority Coalition of Cass County, took place from 11:30 a.m. to 1:30 p.m. on Friday. The event featured a free soul food dinner and providing a black history program for the community. Hosted near Cassopolis at the William J. Robinson Community Center on Mt. Zion Street, the keynote speaker was Attorney Edwin Johnson III.

The motto for the Minority Coalition being “Improving relations between the races in our county,” the theme for the Minority Coalition this year was “United We Stand.” Johnson spoke about being honest about people who they are and about our past. He said the Civil War was fought over slavery and so was the American Revolutionary War, but the Revolution was fought to establish slavery and not abolish it.

“Slavery was sanctified in the Constitution,” he said, reading parts of it to the gathering.

He also said he believes black lives matter, but so do blue lives, white lives and Hispanic lives.

Juneteenth, celebrated all over the United States, has its origin in Texas, when two-and-a-half years after the Emancipation Proclamation on June 19, 1865, the slaves in Galveston heard the announcement that they were free. They danced, sang and prayed, while many took off to unknown places to find out what freedom could mean for them.

Now that they could name themselves instead of having to take the name given to them by the slaveholders, the people went to register their new names, while others went to register their marriages. Juneteenth (a shortening of June 19) is a triumph of the human spirit over the cruelties of slavery and a celebration of the legacy of those gone before, who endured the institution with great perseverance and resistance.

With a menu of fried fish and chicken, cornbread, boiled cabbage with ham, black-eyed peas, spaghetti, macaroni and cheese, okra, sweet potatoes, collards with ham, watermelon and myriads of desserts, a plethora food was left over for take-out.