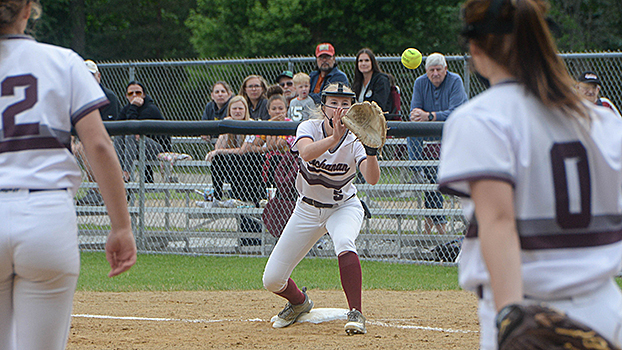 The Bucks advanced to the championship game after defeating Berrien Springs in the semifinals, 9-3, but later fell to power-house Constantine, 10-0.

Starting the season 0-4 with several of kinks to overcome, Carlson was skeptical of how her team would perform during her first year.

“We had some adjusting to do,” she said. “We had to try new things, had some defensive problems early and we lost a few players. I had a plan, but things never seem to go as planned, so I wasn’t sure how it would all turn out.”

But as the season went on, she saw a big change.

Buchanan claimed the BCS Athletic Conference title, despite losing its top two pitchers. That’s when freshman Sophie Lozmack, with little varsity experience, stepped in to throw the heat at the mound.

“She’s stone cold,” Carlson said. “She comes out and manages her game. Anytime things have been on the line she has done a tremendous job for her age and I am so proud of her performance not only this season, but today.”

In its final contest of the season, Buchanan played a team they hadn’t faced yet and one who came out fierce. Constantine proved it had the experience and skill needed to win the title and the Bucks were unable to overcome the hitting game of the Falcons.

Lozmack’s change-up was troublesome for Constantine early in the championship game, but in the third inning the Falcons exploded, grabbing two home runs – one out of the park – which sparked a rally. After five innings of play and a 10-run rule, the Bucks’ season with a 21-12 record.

“We just kept getting better as the season went on,” Carlson said. “The team started to click and things were working. Our defense did a complete 180 from the start of the season. Even today in the final game we made some defensive plays no one has ever seen before. I’m absolutely thrilled. This team did great this year and we overcome many obstacles.”