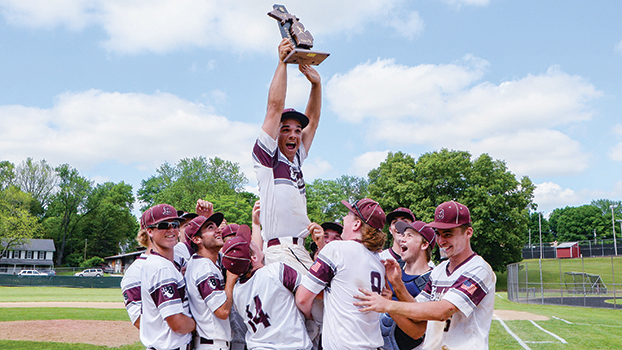 BUCHANAN — For the fourth straight year, the Buchanan baseball team has earned the title of district champion.

The Bucks met with Cassopolis for the Division 3 game Saturday afternoon, claiming the 9-1 victory. Although the score may not reflect it, the game was a challenge for Bucks’ coach Lonnie Hoover and his team.

Buchanan held a 5-0 lead after four innings of play and allowed the Rangers their one and only run in the fifth. The Bucks seemed to lose their momentum slightly after Cass’ lone run, but quickly turned the game around with an explosive four-run sixth inning.

“We were hot out of the gate, then seemed to get frustrated because we couldn’t make anything happen and made some mistakes we shouldn’t have,” Hoover said. “That’s what happens when you have a young team. Thankfully our bats came back to life in the sixth inning and the focus was back on the win.”

Buchanan is led by only two seniors — Dylan Colglazier and Jacob Hoover, son of coach Hoover. The remaining lineup includes with five juniors and four sophomores. Hoover said the future is very bright for his Bucks, but right now the main focus is on regionals.

“We had some very good practices before this district, but now it’s time to give that much more,” he said. “We have a tough regional coming up next weekend, but we are also on our home field again and that always helps.”

Sophomore Brad VanOverberghe went 2-for-4, including two RBIs for Buchanan in the final game. Cam Lorance went 2-for-2 and Dedrick Aderkerson added a single and two RBIs.

Dylan Greens singled in the lone run for the Rangers.

Cassopolis, which ended its season 14-7, advanced to the championship game after defeating Berrien Springs in the morning game, 12-2. Buchanan secured their place by defeating Bridgman in just 16-0 in three innings.

Rangers coach Andrew Brawley said his team had a great run the last half of the season and he was hoping to give Buchanan more competition based on his team’s recent performances.

“We just couldn’t do it,” he said. “We were tired and you have to play perfect to beat Buchanan. They’re bigger, they throw harder and they’re faster than us. We made a few crucial mistakes and we couldn’t catch the ball. You can’t do that against a team like this.”

“That last game is always tough because you know you’re losing some kids,” Brawley said. “This year’s group of seniors are great. It’s been a pleasure coaching them all. Xander (Smith) is one of the best players I have ever coached since my career began here,” Brawley said.

Buchanan will face Schoolcraft on Saturday at noon for the regional semifinals held at Buchanan.