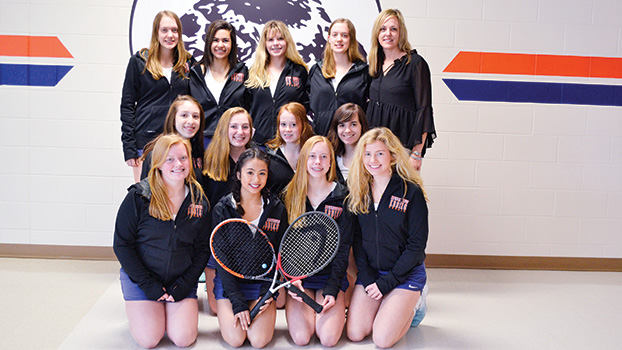 The Edwardsburg tennis team finished third at the regional and advances to the state finals. (Leader photo/EMILY SOBECKI)

Eddies heading back to state finals

THREE RIVERS — For the fourth consecutive year, the Edwardsburg tennis team has qualified for the state finals by finishing third at the Division 3 regional hosted by Three Rivers High School Thursday.

Sturgis was the regional champion with 20 points, while Parma Western was second with 19 and the Eddies third with 18. Marshall was fourth with 17 points.

“We knew going in that we had a chance to qualify and our girls played well all day,” said Edwardsburg coach Kim Bartz. “Beating Marshall at both No. 2 and No. 3 doubles was big as it gave us the extra points we needed to get past them. This is the fifth time in six years that we have qualified and it is always exciting to be able to take that step.”

Edwardsburg’s Sarah Scheretie and Grace VanOverberghe were regional champion at No. 2 doubles with a 4-6, 6-3 and 6-3 win over Carly Holcomb and Rebecca Longman of Marshall.

The Eddies’ Margaret Brown and Elizabeth Brown were regional champions at No. 3 doubles as they defeated Marshall’s Kennedy Karns and Grace Underwood 6-3 and 6-3.