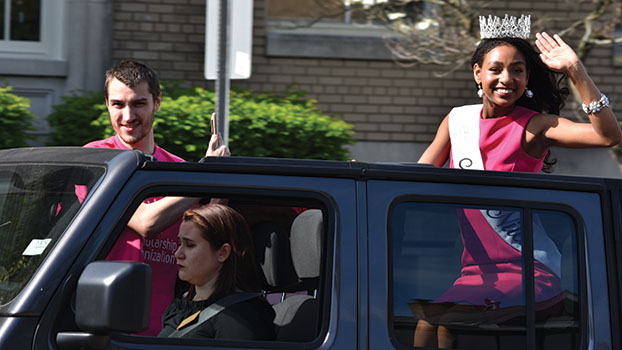 NILES — Riding in an open top Jeep, Miss Niles Kimberley West touted a glittering crown and sash as she waved to the community while touring the city Thursday.

While getting dressed up for numerous events is part of the role of those selected to be part of the Miss Niles court, wearing the crown also comes with the duty to serve and engage their community.

The longstanding tradition to tour the city is part of accomplishing that goal.

For the tour, Tyler Automotive donated a Jeep the court to borrow. The court first began its tour at Niles City Hall and worked its way across the city. Members toured the downtown and chatted with business owners and stopped into El Amigo Pepe for lunch. Their itinerary also included reading books to children at the library and visiting Eastside Connections students, who are currently housed at Oak Manor, due to bond construction.

West, a Niles High School senior who intends to become a civil rights lawyer, said she enjoyed the chance to tour city hall and see how it operated.

“It was really cool to see all the ins and outs of what everyone does to make the city function, because there is a lot of work that everyone puts in,” West said.

Angie Bielski, chairman of the Miss Niles court, said the tour is a good way to connect the youth on the court with their community.

“This is kicking off our summer community help,” Bielski said. “We thought let’s get out and let the community see who we are.”

Serving the city in which they live is a big part of the role as Miss Niles Court. Those who wear the crown take part in numerous parades, volunteer during Relay for Life, which raises money for cancer research and assist during the Niles Burn Run, which raises money to send youth burn victims to summer camp.

Since earning the title of Miss Niles 2018, West said she has enjoyed every aspect of the role.

“I don’t think I can pick just one thing,” West said.

One definite benefit of the experience that the youth agreed upon Thursday was the chance to use the opportunity as a platform to be community role models, especially to younger children. Wearing a crown helps to capture their attention, they said, and it’s a chance to set a good example.

“Kids are very impressionable,” West said. “So if they look up to you, anything you tell them is going to stick with them.”

West said children can accomplish this simply by taking the time to talk to children and instilling little moral values like “listen to your mom” and “do your homework.”