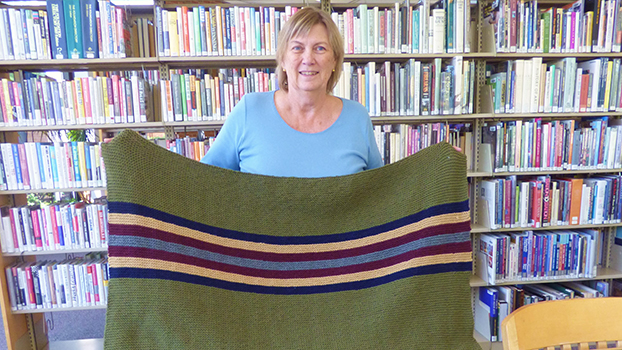 EDWARDSBURG — It’s been an interesting adventure into both history and knitting for Edwardsburg area resident Sandy Wilhoit this last year. She is a member of the Rebecca Dewey Chapter of the Daughters of the American Revolution in Three Oaks and decided to enter their American Heritage Fiber Arts Competition.

“Carol Kent is our chapter’s American Heritage chair and she encouraged us to enter,” she said. “I was amazed that I took first place in the state, I never dreamt that I would win. It was a total surprise when I took third in nation, I almost fell out of my chair. It’s quite an honor. I still can’t believe I won.”

She learned of the state honors earlier this year and the blanket was on display at the Michigan DAR state awards program in April. She learned more recently of the national honor. Her blanket will not be at the national DAR gathering in Washington next month, but a picture of it will be in the commemorative booklet produced for the meeting.

After Wilhoit decided to enter the competition, she had to then settle on both what she wanted to make and how she wanted to do it. She found a simple World War I blanket pattern and decided to try her hand at knitting it. “It had to be a historical theme but then it was my choice,” she said.

With the nation commemorating the 100th anniversary of the end of World War I this year, she felt that the World War I service blanket would be a good choice after considering a Red Cross pattern as well as socks and hats.

As for knitting, she said she’s been knitting for eight to 10 years after teaching herself how to do it. “I had done cross-stitching and crocheting for years and then I taught myself how to knit,” she said. “The Red Purl shop downtown used to have blocks of the month which I did and that helped me learn how to adapt patterns.”

Wilhoit, who works at Signal Travel in Niles, said it took her a good six months to make the full-size blanket in time for last December’s contest deadline. In addition to the finished product, she had to send pictures of the work involved in making it.

Part of the work involved finding historically accurate vintage colored yarns and then weaving together the different colors. She learned how to do the latter by watching YouTube videos.

As for the yarn, it came from Quince & Co. and is 100 percent wool and American made. Colors she chose were Marsh, Camel, Pea Coat, Malbec and Kumlien’s Gull.

Wilhoit said she initially thought of donating the blanket to her DAR chapter for a fundraiser but has since decided to give it to her nephew who is a Marine veteran who served from 1994-96.

She has been a DAR member since 2011, joining with her sister and niece. She said joining the DAR as well as her family genealogy research has made history come alive for her. “We came in under our sixth great grandmother who was a Quaker widow who gave supplies to Revolutionary troops,” she said. “They declared her a patriot.”

Wilhoit said she’s already thinking about what to do for this year’s DAR American Heritage competition where the theme centers around honoring patriots and preserving family stories.

EDWARDSBURG — Every day, Sean Jesse, 33, wakes up early to get to Edwardsburg High School, where he prepares to... read more