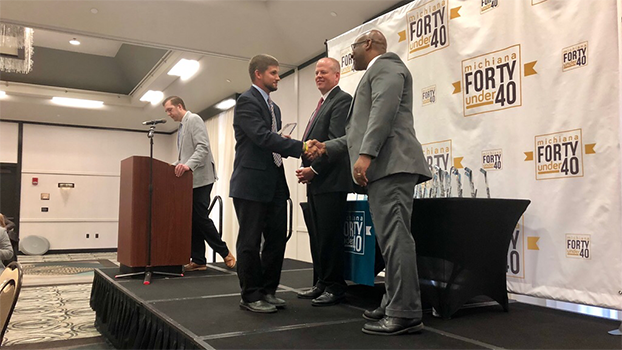 Sean Jesse holds his award at the Michiana Forty Under 40 luncheon. Jesse is a geometry and algebra teacher at Edwardsburg High School. (Leader photo/ANDREW MENTOCK)

EDWARDSBURG — Every day, Sean Jesse, 33, wakes up early to get to Edwardsburg High School, where he prepares to teach geometry and algebra throughout the school day. After school, he rushes off to soccer practice — he coaches boys varsity in the fall and girls varsity in the spring. Before going home, he goes back to school to tutor students in need of extra help.

This type of effort from a teacher is not always publicly noticed, but it was on Friday, May 11, when some of the best and brightest young leaders that southwest Michigan and northern Indiana has to offer were honored at the annual Michiana Forty Under 40 luncheon. Included in the group of honorees was Jesse.

“The thing with Sean is he basically lives in our building and he goes above and beyond,” said Ryan Markel, the principal at Edwardsburg High School. “He’s the student council advisor, he’s a soccer coach, he’s a math tutor, so he just does so many different things for our kids and our community, and that’s why we thought he would be a great representation of our high school.”

Jesse has been a teacher in Edwardsburg for eight years and has been a fixture as a coach for many of those years. This past Fall, he coached the Edwardsburg boys soccer team to a district championship and was named the Wolverine Conference Men’s Soccer Coach of the Year. He was nominated by the high school.

At the luncheon, he sat with the other honorees and received an award to signify his accomplishment.

“In the teaching world, at least, you don’t always get appreciated,” Jesse said. “At least not directly, so having someone say, ‘hey, you’re doing a good job’ and notice that you’re going above and beyond — it’s rewarding.”

He says he was very surprised to be honored, and that he was just doing what he thought was right. He said he sincerely cares about his students, and does not put in the effort that he does for the accolades.

He also sees many other teachers at Edwardsburg giving the same level of effort as he does.

“The teaching staff at Edwardsburg is phenomenal,” he said. “They really care about their students and there’s always someone at the school working. They are always putting in those extra hours — that extra time. The students themselves, they are very caring, they’re motivated, they want to do well and so they’re out there kind of pushing themselves. They treat me with respect. That’s something that’s always nice to have.”

Going forward, he sees himself teaching for a long time. That is, as long as he helping students graduate.

“I work with a lot of kids who do struggle,” Jesse said. “If I can keep pushing them along and getting them to that diploma, I’m going to be excited.”

Markel says that one of Jesse’s greatest abilities as a teacher is that he finds a student’s weakness and “building them up.” If they are struggling with fractions, he focuses on that when working with them.

“Sean does a really good job of pinpointing those skills and working with them to get them caught up,” Markel said. ”Obviously, his classroom is very enthusiastic and kids like his class, but from my perspective, his strength is identifying what their needs are, where are the kids lacking.”