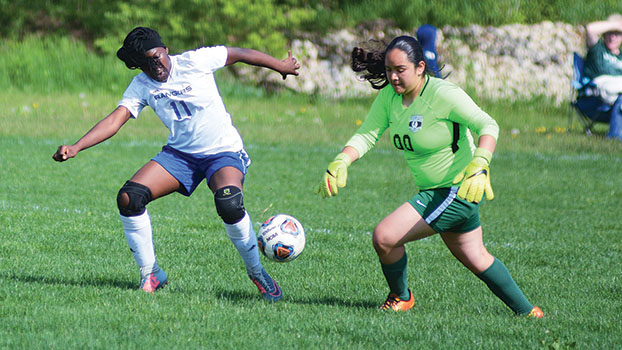 Cassopolis’ Angel Gary (above) scored both goals in the Rangers’ loss to Hartford. (Leader photo/SCOTT NOVAK)

CASSOPOLIS — Visiting Hartford outscored Cassopolis 5-2 in the first half and went on to win its Southwest 10 Conference match 6-2 Monday.

Angel Gary scored both goals for the Rangers with Tristin Gless and Jamie Smith picking up the assists.

Scoring for the Indians were Mercedes Requenes with four goals and Abigail Lopez with a pair of goals.

NILES — The Rangers went 1-1 on Saturday.

Cassopolis lost to Brandywine in a shootout 3-1.

The Rangers and host Bobcats were deadlocked at 1-1 after regulation.

Gary scored the lone goal in regulation with an assist from Katelyn Waldschmidt.

Amy Adams scored the lone goal in the shootout.

In the consolation match, Cassopolis defeated Buchanan 3-2 in a shootout.

The Bucks and Rangers were deadlocked at 2-2 at the end of regulation.

In the shootout, Gary, Conlley and Taylor Herwick scored goals.

COMSTOCK — The host Colts shut out Cassopolis in a non-conference match 3-0.

BANGOR — The Rangers were defeated by the Vikings 6-1 in Southwest 10 Conference action.

Waldschmidt had the lone goal for the Rangers.

CASSOPOLIS — It had been six years since the Cassopolis track program hosted a home meet. But that all changed... read more