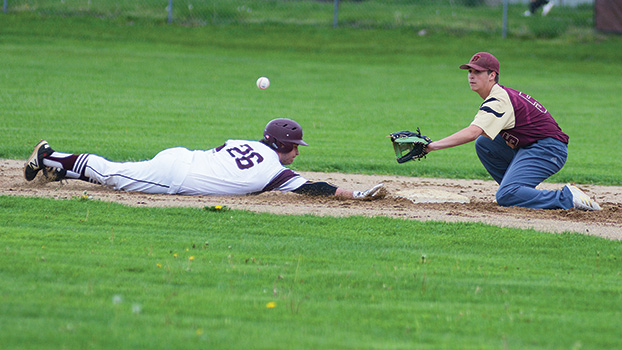 Buchanan’s Adeen Harrington (26) dives back into second base ahead of the pickoff throw Tuesday. (Leader photo/SCOTT NOVAK)

Buchanan completed the sweep with a 12-2 victory in the five-inning nightcap.

“Overall, we played a well-rounded couple of games,” said Buchanan coach Lonnie Hoover. “Pitching and defense has been our strong areas in the conference this year and last night the bats came alive up and down the line up.”

Buchanan finished with 13 hits in the opening game, including a 3-for-3 performance by Josh Reed. Reed tripled and drove in two runs for the Bucks, who got two hits each from Sam Riley, Adeen Harrington and Cam Lorance.

Harrington and Lorance both doubled and combined for three RBIs.

“Several players collected multiple hits and got runners across the plate last night helping us limit the amount of runners left on base,” Hoover said. “We played as well as we have all year in all aspects of the game last night.”

The Bobcats’ lone hit came off the bat of Connor Janowiak.

Hoover went the distance and struck out 13.

Ty Mickiewicz started and took the loss for Brandywine.

The Bucks banged out nine more hits in the second contest.

Harrington, Gannon Kutemeier and Lorance all had two hits.

Harrington doubled and drove in two runs, while Reed tripled and dove in a pair of runs. Brandon Rogers and Kutemeier both finished with a pair of RBIs.

Brad VanOverberghe pitched all five innings and did not allow a hit. He struck out five and did not walk a batter.

Corbin Eckenberger started for the Bobcats with Brock Prenkert and Derek Lloyd also taking the hill.

“I was happy with the three freshmen — Jakob Luczkowski, Jacob Fox and Steven Justus — who I brought up from the JV and started,” said Brandywine coach David Sidenbender. “They brought good energy. Ty wasn’t as sharp as he has been, but pitched well enough to keep us in the game. We just didn’t make the routine plays to help him. I was extremely happy with Joe Covyeou behind the plate. He did a great job defensively.”

The Vikings blanked the Bears 4-0 in the opening game as Tayton Stevens tossed a two-hitter, while St. Joseph rallied to take the second game 5-4.

Stevens struck out four and walked one to earn the victory as he went the distance.

Niles had five hits in the game, including a pair from Cade Vota.

Kendall Whitelow drove in a pair of runs for the Vikings.

In the nightcap, Johnny Bybee suffered the loss. He worked the first five innings, allowing four runs on nine hits with three strikeouts. Chad Barton pitched the final inning and allowed one hit.

Offensively, the Vikings had nine hits, including a 2-for-3 performance by Barton and Bybee. Bybee also drove in three runs.

Vota added a double for Niles.

CASSOPOLIS — A strategic plan that has been in the works since December 2017 is being halted due to concerns... read more