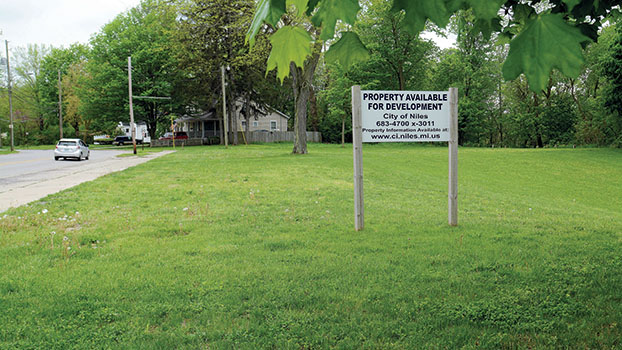 A section of Third Street was the topic of discussion at Monday night’s Committee of the Whole meeting. The Planning Commission presented a conceptual plan to transform the street from Broadway to Bond. (Leader photo/KELSEY HAMMON)

NILES — On Monday night, residents who attended the Niles City Council Committee of a Whole meeting took a virtual tour of a conceptual plan to transform Third Street between Broadway and Bond streets.

The project, called the Third Street Village Plan, is nothing more than a vision, but community leaders said they think such a design could potentially attract developers, while examining a way to address a need for more housing.

Architect Sam Lima, of Kil Architecture, who has been working with the city’s Planning Commission to design the concept, walked the audience through the features of the idea. The council and those in attendance were given a chance to discuss the concept and ask questions, following the presentation.

“Third Street is one of the prominent corridors that is coming into downtown,” Lima said. “Demolition of the public safety building [at the southwest corner of Third and Broadway] has left it open to future development.”

The design included multiple living spaces, such as multi-family housing and town homes. Some smaller scale courtyard cottages were also proposed at the corner of Oak and Third streets and adjacent to the St. Joseph River.

“There was some interest in providing small homes that could be affordable, possibly for younger folks, people without a family,” Lima said. “There has been a lot of interest in courtyard cottages, which is essentially a smaller cottage surrounding a communal space, where there could be gardening and recreation.”

Commercial shopping, outdoor areas, a public plaza and a number of upgraded features were also among the plans in the conceptual design. Preserving architecturally significant homes and structures, while incorporating the design of current homes were also major components to the conceptual plan.

The Third Street Village Plan is one Community Development Director Sanya Vitale said is a conceptual design that could be as many as 20 years in the making.

“Just talking about this project has brought a lot of momentum in the community,” Vitale said.  “There has been a lot of interest from developers not only in this project, but our former YMCA site has some interest in a multi-family residential apartment complex.”

As Niles continues to grow and draw more people to call its community home, Vitale said there will be a need for more housing options. The Third Street Village Plan theorized how this need could potentially be addressed.

“As many of you know, we are a land locked community,” Vitale said. “Niles is five and a half square miles and we don’t have a lot of opportunity for development or redevelopment. This is an amazing opportunity to bring in well over 200 additional units of middle market housing, which during our place plan analysis was showing a lack of about 650 of those units.”

City administrator Ric Huff emphasized that the project is just a concept at this phase. He said the people who live in the area surrounding Third Street currently would not be booted from their homes. Instead, he said the city would look at renovating unused or vacant spaces.

“What I want to make sure is that people in this area don’t think we are going to be showing up and trying to take their house,” Huff said. “This is just part of a multi-year process for a comprehensive marketing package for developers to show them that there is potential and there is a concept of what could happen.”

On that note, Vitale added that part of this overall concept is looking at finding funding to provide to residents in the Third Street section to rehabilitate their homes, as well as other needs like improving lighting and sidewalks.

“It is not a quick solution,” Vitale said. “It really is a lifetime project where we hope in the course of a generation to see something like this transpire somewhere in our community.”