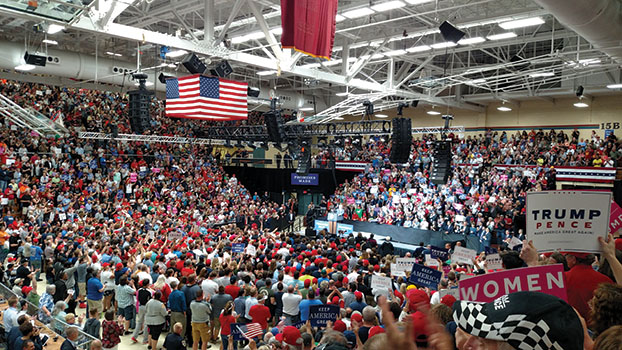 ELKHART — When President Donald Trump visited Elkhart, Indiana Thursday for a rally, the event drew thousands of people from all over the country to hear him speak. Among those in attendance were residents from Berrien and Cass counties, eager to be part of the president’s visit to the Michiana region.

Pauline and Shane Harris, of Edwardsburg, pulled their daughter Riley, 14, out of school Thursday so that she could take part in the rally. The family arrived in Elkhart at about 1 p.m. to line up outside of North Side Middle School and join a crowd of avid Trump supporters donning bright red T-shirts and paraphernalia bearing the president’s 2016 campaign slogan: “Make America Great Again.”

While Pauline said her family considers themselves Trump supporters, they felt it would be a great opportunity to take part in a nearby rally, no matter what politician had the spotlight.

“People came from all over just to be part of this event. We opted to bring Riley and she wanted to go,” Pauline said. “We felt pulling her out of school was important, no matter who the president is. What are the odds you get to see a president in your lifetime?”

While people did not have to purchase tickets for the rally, they did have to register to get in. Pauline said her family was lucky enough to make it inside the packed school venue, with a capacity for more than 7,200 people.

“Every bleacher was full,” Pauline said. “[It was] very energetic.”

Trump’s visit followed the Indiana primary for the mid-term elections, which took place earlier this month. Trump spoke to the crowd for about an hour and a half. In that time, he endorsed Republican candidates, particularly Michael Braun, a nominee for the U.S. Senate in Indiana, who is seeking to replace Democrat Joe Donnelly.

Pauline said the rally was more about pumping up the crowd than delving too deeply into current issues.

Largely, Pauline said the crowd seemed there to show support for Trump. She said they had prepared Riley to encounter protestors. The few people in opposition to Trump, Pauline described as peaceful and “non-obstructive.”  There was only one demonstration Pauline said she saw inside the speech venue, which occurred when Trump addressed the wall.  A group of teens held up a sign that read: “Proud immigrant.”

Pauline said she saw a number of young people at the event and was happy to see them getting civically engaged.

“It was cool to see, no matter what side of the aisle you are on. It’s cool to see positivity and excitement over politics,” Pauline said.

A group of Niles New Tech students also traveled to Elkhart for the rally. Drew Rudlaff and Eli Fruk, both 12th graders, were among them.

Rudlaff and Fruk said they first saw Donald Trump when he was campaigning in 2016 and visited the South Bend Century Center.

The students said they believe it is important for young people to take part in events such as the rally, even if they can’t yet cast their own ballots to vote.

“We are becoming adults and will have the power to vote soon,” Fruk said. “Younger [people] like us should be more aware.”

The teens described the atmosphere as an exciting one.

“It was like a red storm of ‘Make America Great Again’ hats,” Fruk said.

While Rudlaff and Fruk said they agreed with most of Trump’s talking points, they did not side with the president on every single issue. Regardless, they said it was an opportunity to watch Trump speak.

“It was exciting to see him talk about the decisions that will affect my future,” Fruk said. “It was an awesome experience to see people from Niles there.”