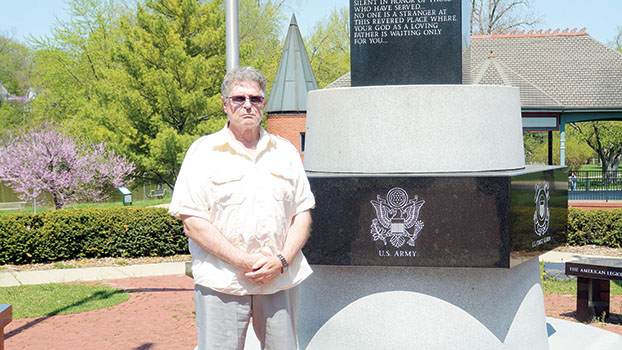 Odie Stewart stands in front of the Veterans Memorial in Riverfront Park Tuesday. Stewart is helping to organize a rededication of the memorial on May 19. (Leader photo/KELSEY HAMMON)

Niles Veterans Memorial to be rededicated in ceremony

NILES — One a typical day when Odie Stewart was ordering his coffee at the Niles Starbucks in Martin’s, a barista approached him with his beverage and noticed that Stewart was a veteran.

Stewart served during the Vietnam War era and sometimes wears a cap emblazoned with the words “Army.” He is also known for his work as a vice commander with the Niles American Legion Post # 26, an entity that serves local veterans.

Rather than passing off his beverage and going along her way, the woman took a moment to thank Stewart for his service in the Army.

That day, Stewart had been preparing to sip his caffeine beverage in the café alongside several of his friends, who like him are also veterans. When Stewart told the young woman this, she also thanked them.

Having a young person recognize him and his friends for his service was touching, Stewart said.  This feeling of gratitude is something Stewart hopes to share with other local veterans through a rededication of the Veterans Memorial in Riverfront Park.

The Niles American Legion Post #26 will host the rededication at 4 p.m. Saturday, May 19. The event is free and open to the public. In addition to a ceremony, there will be coffee and water available. The beverages were donated by Bigby Coffee in Roseland and Martin’s.

Stewart has helped to organize the event and invited people to bring a lawn chair and attend.

“People need to be re-educated of why [the Veterans Memorial] is there in the first place and that is to pay homage to the veterans, in order to not be forgotten,” Stewart said. “The ceremony is going to be centered around the words: ‘you are not forgotten.’”

The ceremony will be opened by minister Linda Bradford, of Mounty Calvary Church in Niles. Bradford will say a prayer and make a statement.

Also, in attendance will be the Pokagon Band of Potawatomi Indian Tribal Veterans Committee. Marine Captain Brockelmeyer will present the Missing Man Table, a tradition that shows a table set for one, representing a missing soldier. The Naval Ensigns will be presented by the University of Notre Dame ROTC.

Stewart said the message he wants to convey is that local veterans are not forgotten. He also wanted to recognize the work of key players who help the Riverfront Memorial come to fruition. Stewart said one of those players is Lou Liebetrau, a local patriot, who helped advocate for the project. Liebetrau is among those planning on attending the event May 19.

“It was a group of community patriots that worked for numerous years to make this project stand where it does now,” Stewart said. “There was a lot of meaning, passion and dedication that went into such a venture.”

But he said Liebetrau in particular “fought like crazy” to make the memorial happen.

Thanks to Liebetrau and other community members, the Veterans Memorial was first dedicated Nov. 7, 2007. Since then, it has served a place along the St. Joseph River, where community members can come to remember the sacrifice of veterans.

In November, Stewart hosted a Veterans Day service at the memorial. The event celebrated veterans and reminded them that other veterans were there to support them in the Niles community.

As to rededicating the memorial, Stewart said he hopes it become a tradition every 10 years to continue to remind people of the memorial’s importance and to remember the veterans in Niles and across the nation.

Stewart also said he hopes people across Michiana attend and stay to enjoy a day in Niles.