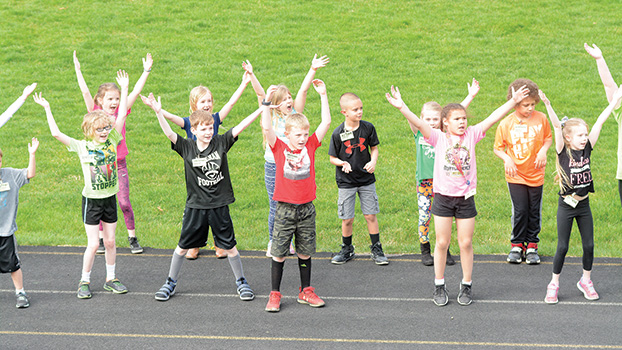 BUCHANAN — As music poured from the speakers and onto the Buchanan High School track Wednesday morning, more than 700 children from Ottawa and Moccasin elementary schools danced to the beat.

The students were joined in the physical activity by approximately 500,000 students across the nation for an event called All Children Exercising Simultaneously. In Michigan 83 counties participate in the event.

In Buchanan, students participated in the event by walking several blocks from their respective schools to the high school. They then participated in a half-hour exercise routine designed by physical education teacher Jessica Leenhouts, whose goal was to make the day’s routine feel more like fun than exercising.

Leenhouts, who teaches students at Moccasin and Ottawa, spent the past month leading students in choreography for three different songs. Leenhouts said learning new dances for ACES was a tradition started by the former physical education teacher, Tammy Fox, who thought dance was a particularly fun way to get children excited about exercise, mostly because it does not feel like exercise at all, Leenhouts said.

“My goal is to educate them on living a healthy life for their lifespan,” Leenhouts said. “Dancing is one of those easy ways to do that. You don’t realize it’s exercise. You have fun doing it and it’s a social norm, too.”

Students, parents and Buchanan high schoolers were invited to watch students perform the dances. S ome even joined in the moves themselves.

Prior to showing off their dance moves Wednesday, students learned about the importance of staying active. With a microphone in hand, Leenhouts shared with students why they participate in the national day of exercise.

“The goal of ACES is to celebrate and bring attention to the important role that physical activity should play in our lives,” Leenhouts said.

Just by exercising 30 minutes a day, five days a week, Leenhouts said students could cut down their risk for disease and illness.

The national tradition was founded by physical education teacher Len Saunders in 1989, as a way to encourage children to exercise. It is considered a signature program of the Youth Fitness Coalition.

To cap off the tradition, students who lined the full length of the track participated in a giant wave. They were also permitted to toss their coats in the air to celebrate the event.

As students danced Wednesday, Leenhouts said she hoped it emphasized that exercise can be fun and healthy.

“Kids don’t understand that physical activity can be just dancing,” Leenhouts said. “They might think it is sports. I really want to break that in them that it is so much more.”