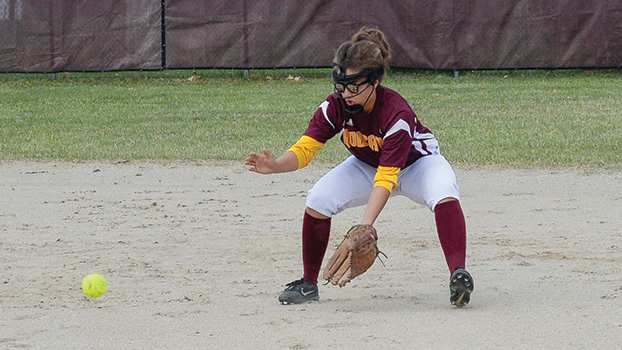 THREE OAKS — It was a tale of two games for Brandywine (5-3) Thursday afternoon against a talented River Valley (8-4) team.

The Bobcats rode on the back of pitcher Delani Nelson and her 10 strike outs the first game to upset the 10th ranked (Division 4) Mustangs 4-3. Nelson not only got it done on the mound but also at the plate as a two-run triple in the third inning gave the Bobcats the lead for good.

Alysa Adamczyk was able to get on base twice and score while Kennedy Byrd was able to drive in a run.

In game two, the gas tank hit empty and the bats fell off, as River Valley was able to cash in on several base hits and five Brandywine errors. The Bobcats struck first in the top of the 3rd inning when Nelson was able to drive in Zarah Vandygriff with a RBI double.

After that River Valley scored 11 unanswered runs and forced a mercy rule to come into effect with no outs in the 6th inning. Six of the 11 runs the Mustangs were able to score were unearned.

Nelson earned the split decision pitching for the day overall completing 11 innings of work with 14 strikeouts, one walk, and gave up seven total runs (five earned).

Durand edged the Bobcats 54-51 for the team title.

Megan Schmidt captured the championship at No. 3 singles for Brandywine, and Carrigan Duffield and Alysa Marlin, were champions at No. 3 doubles.

“What a great job by our entire team as the tournament championship came down to an early round three-set match between us and Durand,” said Brandywine coach Joe Marazita. “We came up just short. Most of the teams are state qualifiers, so I was very pleased with our performance, in less than ideal weather. After going 7-1 in the first round, we knew Brandywine was going to have a good day.

Gull Lake won the 18-hole tournament with a team total of 320.

Medalist honors went to Will Anderson of Portage Central, who shot 72.

Niles was led by Alex Krueger’s 82.

The Vikings also got a 92 from Thomas Nate, a pair of 95s from Drew Rudlaff and Zach Appleberry, as well as, a 96 from Connor Tibbitts and a 104 from Matt McKeel.

NOVAK: Thank you everyone for your thoughts and prayers

As most of you know from last week’s column it has been a pretty tough couple of weeks for my... read more