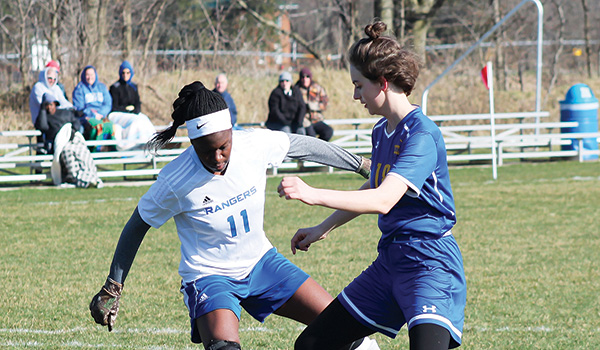 CASSOPOLIS — The Cassopolis soccer team squared its record at 2-2 with a 7-0 win over visiting New Buffalo in non-conference action Thursday.

The Rangers got three goals from Angel Gary, two goals from Aysia Conlley and one goal each from Avaka Mase and Amy Adams.

Katelyn Waldschmidt, Gary, Adams and Conlley each had an assist for the Rangers.

On Friday, the Rangers dropped a 2-1 decision to visiting Berrien Springs.

Angel Gary had the lone goal for the Rangers, who had 22 shots on goal.

The Rangers are now 2-3 on the season.

The Cassopolis softball team went 2-4 over its last five games.

The Rangers dropped a pair of games to Decatur, 2-0 and 7-4, before rebounding to defeat Lake Michigan Catholic 13-12 last Friday.

On Monday, the Rangers split a pair of Southwest 10 Conference games with White Pigeon.

The Chiefs won 11-10 in the first game, while Cassopolis rebounded for an 8-6 win in the nightcap.

EDWARDSBURG — The Edwardsburg baseball team improved to 12-1 on the year with a sweep of visiting Dowagiac Tuesday. The... read more