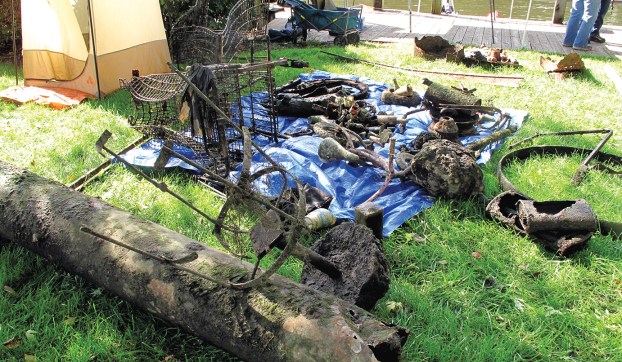 Local scuba divers search for unusual items in the river

Rusted bikes, old and smelly tires, an assortment of glass bottles discarded pipes, a broken shopping cart and car engine parts: these are all items one would expect to find at a local landfill or waste management company — but they are also items that local scuba divers often find at the bottom of the St. Joseph River in Niles.

While it may startle some to know that these items are at the bottom of the river, they are actually quite common.

“It’s representative of the type of junk you have in your river,” said Don McAlhany, a member of the local scuba diving, the Michigan Underwater Divers Club. “It’s like a dump.”

For the past two years, the MUD Club has hosted an ecology dive in the St. Joseph River, where divers hunt for junk in the water near Front Street Park in Niles. They plan to host the event again this year in late September or early October. But thanks to the recent flood, there were some new and unusual items in the river such as toys and a Port-A-Potty.

“If we find a Port-A-Potty, we will bring it up,” McAlhany said. “By now, the tank will have been diluted sufficiently that we could bring it up. Generally, when we start to bring up something like that, we want to make sure that the city will be able to pick it up and dispose of it.”

It’s important that the MUD Club has a way to dispose whatever they find in the river because it is unsafe and unhygienic to leave it a dock or bank.

“We take it home or we put it in the trash, and we always like to be able to put in in the trash,” McAlhany said. “For example, If we can’t dispose of a tire, I am not going to bring it up — my wife doesn’t want me bringing anymore home.”

However, not every item the club finds can be disposed of such as unopened safes, guns in good condition and new bicycles. These items were likely stolen or used in a crime.

“I can go out there any day I want to and get a bicycle,” McAlhany said. “Generally, they are not in good shape. When they are in good they are right off the bridge. So if you find them after someone dumped them within a week, those are good. When we find those, we put them on the dock and call the police and they come by and pick it up.”

The most unusual item he has ever found near the Niles Main Street bridge is a replica Viking sword.

“I am sure somebody swiped it and they can’t take that home because momma is going to notice a five-foot sword,” he said. “So they chucked it over the bridge.”

Not everything that the divers find is something they want to take from the water. In certain areas and at certain times of the year, the river can be contaminated with bacteria. They need to be especially cautious of areas near sewage treatment plants and businesses that dump diluted chemicals into the river.

Other potentially polluted areas of the river are where it deadheads or slows down significantly. That’s where vegetation, decaying dead animals and bacteria can accumulate.

Currently, the water on the St. Joseph river is too fast and high for divers from the MUD Club to safely hunt for items, so none of its members have gone in it.

“The water is still high, we’re pretty experienced doing this,” he said. “I’ve been doing it for 40 plus years. You don’t want to get out there and get yourself trapped just looking for a bottle. … It would be nice to see at least two to three feet of visibility, but you normally don’t get that until midsummer and then in September and October. But as soon as it’s good, we will be out there.”