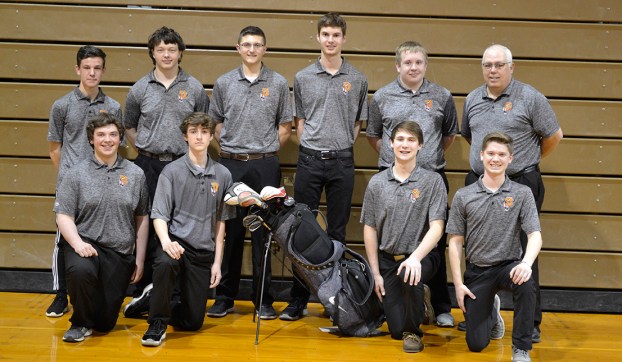 ALLEGAN, Mich. — As temperatures finally exceeded the 70-degree mark in Allegan Monday, the Edwardsburg golf team — and one freshman in particular — was hot on the course.

Defeating nine other teams, Edwardsburg earned first place at the Allegan Jamboree with a score of 158. Adding to the accolades, the Eddies’ Satchel Pierce, a freshman, medaled with a 35 for best in tourney.

“[Pierce] is starting to get into the groove and has bought into the program and believes in his teammates,” said Edwardsburg golf coach Jeff Kozinski. “Satchel knows he has the support of his teammates and knows his guys will take care of business. This has taken some pressure off of him.”

This team focus resonates throughout the entire Edwardsburg golf program, according to Kozinski.

“The key to success in winning the Allegan Jamboree was that the players are starting to ‘trust the process,’” Kozinski said. “We struggled in the first Wolverine Conference match by not reaching our team goals, but since then, our team motto has been ‘trust the process.’”

Kozinski said his golfers are committed to the program and dedicate lots of extra hours to improving as a team.

“The players have been grinding it out in practice day in and day out,” he said. “We have a very competitive team. They push each other to get better every day.”

Not far behind, Dowagiac golfers took home third place, missing second by one stroke to Plainwell with a team total of 175. Dowagiac coach Bob Turner said Nick Saltzman, who scored his career best with a 38, has emerged as a team leader.

“He has been shooting some pretty good scores,” Turner said. “Everyone has been working hard at their game, none more so than Nick.”

Turner said the team has been working hard to play smart throughout matches.

“This season we have been working on being able to think our way around the golf course,” he said. “Being able to select the right club for the shot — every par 4 does not require a driver to be hit off of the tee — and do we punch it back out to the fairway or do we go for the green? Those kinds of things help keep us out of trouble on the course.”

Kozinski said the Wolverine Conference golf teams are very competitive, and he knows his team will have to continue to work hard to stay at the top of the rankings. As weather continues to improve, courses will get in better shape, and Kozinski said that will help all teams.

“The scores should start coming down, but only if we pay attention to the changes,” Turner said. “The conference season is half over already, so hopefully we can keep playing well and finish strong.”

By MIKE MORRISON Leader Publications Contributor NILES — It was not the best game the Brandywine (3-3-1) soccer team played... read more