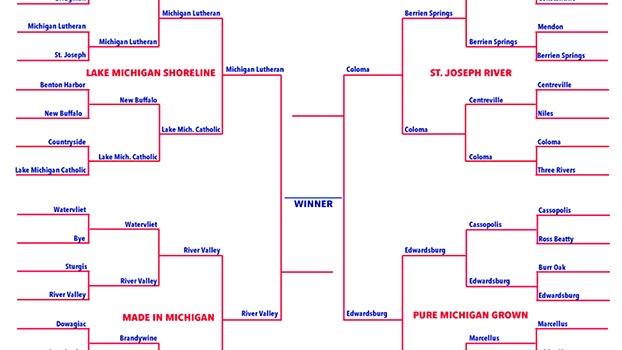 “Each week, we have seen growing participation from area residents expressing their school spirit in many different ways,” said Proos, R-St. Joseph. “Congratulations to the Michigan Lutheran Titans, River Valley Mustangs, Coloma Comets and Edwardsburg Eddies on moving on to the Final Four. Considering the amazing competition in the Elite Eight, the Final Four should be one to watch.”

The tournament began with 31 area high schools competing in four brackets named for features that characterize Southwest Michigan. Each week, the schools with the most points move on.

“This school spirit tournament is designed to give our community a chance to show everyone that no one has more spirit than Southwest Michigan,” Proos said. “The Elite Eight round featured some great competition. One battle was decided by only 23 points, and in another matchup fans submitted more than 1,400 photos and totaled over 8,500 points.”

The matchups in the Final Four are Michigan Lutheran vs. River Valley and Coloma vs. Edwardsburg.

Residents are reminded that there are several ways to earn points for their favorite school, including voting in online polls or submitting unique photos about their school.

Visitors to the John Proos Supporters Page on Facebook can also upload photos and earn bonus points when others “like” their school’s photo album. Another way to earn points is to follow Proos on Twitter and send a tweet to @JohnMProos that includes the school name and the hashtag #SWMISpirit.

The Final Four round will go through noon on Friday. The entire competition will end on Friday, April 6. The champion will receive a special tribute from the governor and area legislators commending their school and will house an engraved trophy until the following year.

DOWAGIAC — Senior Dayleigh Miller scored a first-half goal, which visiting Niles made stand up, in a 1-0 victory over... read more