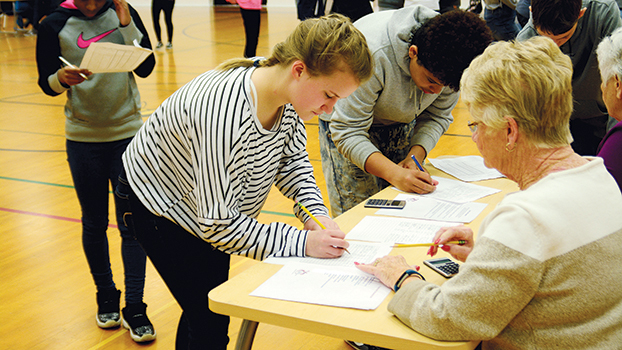 NILES — Balancing a budget can take some careful planning.  Ring Lardner students in the seventh and eighth grade learned all about this skill Friday, during a budget simulation project called the “Reality Store.”

Similar to the board game “Life” students were randomly assigned a career, given a monthly salary and tasked with paying an assortment of bills from groceries, utilities and insurance to student loans and child care.

The project was organized by teacher Sherry Lockwood, who said she wanted to teach students about balancing a budget.

“What we are hoping that they learn is that the choices they make now will affect their future when they are 28 to 30 and on up,” Lockwood said. “I especially wanted to target the eighth-graders because they are going to high school and that’s where those decisions can start counting.”

Around the Ring Lardner gym, more than a dozen stations awaited students’ navigation. Students had to pick a house and car, where sales people tried to convince them to buy something bigger, better and out of their budget range.

“We wanted to give them that taste of real life and show them that they need to be in charge of making their own decisions and not let someone talk them into something,” Lockwood said.

In addition to bill booths, students also passed through a category called “Fate” where they drew randomly from a bucket. Based upon that drawing, they had to deal with unexpected scenarios like their car breaking down, getting a speeding ticket, cavity or other unwanted and likely costly incident.

If students maxed out their finances, they reported to a help desk, where a volunteer helped them to go over their bills and made suggestions for how they could slim back their expenses.

“Maybe you need to buy a bus pass instead of a car or cheaper food,” Lockwood said. “And you don’t get [to spend money] on entertainment, unless you have money left.”

For many of the students, balancing a budget with various bills while trying to take care of their family proved interesting and challenging.

Nickens was assigned the job of loan officer and earned $5,557 a month.

“Don’t have kids young and worry about college,” Nickens said of the lessons he had learned Friday.

Across the gym, eighth-grader Eva Shepherd calculated her grocery expenditures. Shepherd was assigned to the career of military personnel and said she thought the exercise was fun, but challenging.

“[I realized] that getting a car is so much more than a car,” Shepherd said. “You have to buy gas and insurance.”

For Chloe Searfoss, an eighth-grader, not giving into the temptation to buy a bigger house and car helped her to save money. In the end, Searfoss said she was able to donate money to charity — yet another booth where students could contribute money.

“It taught me about saving,” Searfoss said of the exercise. “I was most surprised about the cost of insurance. I paid $75 a month. I think this was a really good experience for all of us.”

Lockwood said before students started the bills, they discussed what bills they thought their parents had to pay. After they completed the exercise in the gym, Lockwood said students reconvened to talk about the experience and what they learned.

A Niles Education Foundation grant for $1,000 covered the cost of the project.

“It just seemed like a really good interactive and hands on way for students to learn about budgeting,” Lockwood said. “And learn that the classes and career path they take affects their lifestyle, without teachers just telling them.”