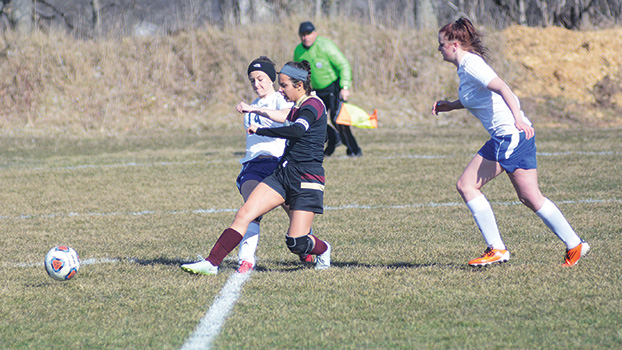 CASSOPOLIS — A pair of soccer teams with a lot of underclassmen on their rosters opened the season Friday afternoon.

Visiting Brandywine got the best of Cassopolis as the Bobcats scored three second-half goals on their way to a 4-3 non-conference victory.

Brandywine (1-0) has 13 freshmen or sophomores listed on its roster, including goalkeeper Gabby Inman, who made a huge save with 12 minutes left in the match to help secure the victory for the Bobcats.

Cassopolis’ Tristin Gless controls a ball against Brandywine in the season opener for both teams Friday,. (Leader photo/SCOTT NOVAK)

The Rangers (0-1) has 11 freshmen or sophomores on its roster, including sophomore Angel Gary, who scored all three Cassopolis goals.

“We scored our first goal right away and then we kind of let up and played a defensive first half,” Brandywine coach Katie Kovac said. “We talked about it at halftime that we need to stay pushed up on defense so that we can get more of an offensive threat, which I think we did well. For half of my team being freshman, I thought we did a fantastic job for our first game.”

First-year Cassopolis coach Kevin Waldschmidt was also pleased with the performance of his young squad.

“I told the girls that two of my goals for this season were to control the midfield and get the maximum number of shots on goal,” he said. “That first half, I think we really did a good job of controlling the midfield. We had a lot of pressure on their keeper that first half. The second half we had an injury that hindered me on my front line there. I had to fill in that spot and players had to mix them up from where I usually play them at.”

Alexia Martinez, one of the few seniors on the field on Friday, scored three of the four goals for the Bobcats, including the opening goal of the season just minutes into the match.

Trailing 1-0, Gary picked up the first of her three goals as she dribbled through the Brandywine defense and beat Inman to tie the score at 1-1.

The match would remain deadlocked for the remaining of the first half.

Just as they did in the first half, the Bobcats got on the board first on a Martinez goal to make it 2-1.

Gary would answer midway through the second half and square the match at 2-2.

For the final time in the match, Martinez found the back of the net, this time to give Brandywine the 3-2 advantage with 15 minutes left.

Gary would pick up her hat trick with just over six minutes remaining in the match was all square once again at 3-3.

With time winding down in the non-conference match, someone not named Martinez or Gary finally scored a goal.

Cassopolis would not be able to mount any type of scoring opportunity over the final minute of the match.

Brandywine and Cassopolis would both finish the match with nine shots.

“She has a lot of learning to do,” Kovac said. “She has not had a lot of goalie specific training yet, so I think she is going to be great.”

Suseland played the first half, while Hill was in the net for the final 40 minutes.

Waldschmidt told his players following the match there is still a lot of work to do.

NILES — Host Brandywine won all but one flight in capturing its own indoor invitational at the Lakeland Athletic Club... read more