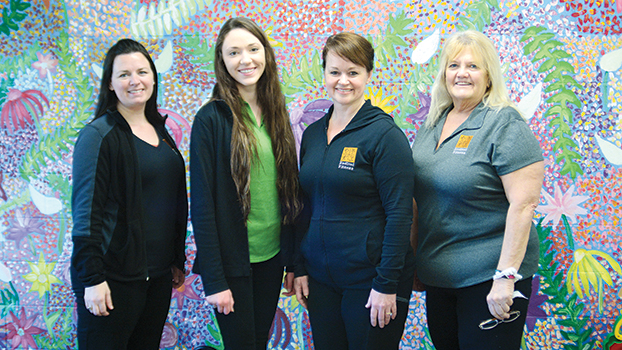 Teresa Green, the owner of Redbud Fitness & Lifestyle Center, posed with her employees in front of a mural at the newly opened facility. From left are, Billi Gardiner, Anika Antisdel, Green and Debbie Romeo. (Leader photo/KELSEY HAMMON)

BUCHANAN — After more than two years of planning and construction, Redbud Fitness & Lifestyle Center opened its doors Monday to an eager crowd.

Whether people are looking for a place to exercise or relax, business owner Teresa Green said she hopes the new facility brings people together for a common goal.

“This is a place where the community can come together and do something that is good for you,” Green said.

Inside the various classrooms, instructors teach yoga, Zumba and other classes, and guided cycling and aqua courses are offered, to name a few. A physical therapist also is available and works with clients on site.

In the near future, Green is also hoping to offer women’s only weight lifting classes. She said her son Mack, or Megan Smedley, a certified Olympic weight lifting trainer, could teach the course.

Green said all of their equipment is top of the line Life Fitness and Hammer Strength brand, which comes with some technology features intended to make a workout as effective as possible. For example, those who do not know how to use some of the machines in the weight room can scan a code with their phone to get video tips for various exercises.

While using the cycling machines, the exertion of the user is measured and emanates a different color based on how hard they are working. This assures that everyone in the class is working at the same pace, Green said.

A childcare center is also available so that parents and guardians can get a workout, while knowing their child is being cared for. After their workout, parents can take the time to relax in the dry sauna room, built from red cedar or the steam room.

“Pretty much anything you can think of,” Green said. “There’s something for everyone.”

Green has worked as a fitness instructor since 2013, when she began operating The Studio in downtown Buchanan. The Studio clientele grew quickly and also inspired her to create a fitness center full of amenities that would be available locally. Green has since closed The Studio and some of her employees and clients have followed her to the new operation.

“The biggest complaint I would hear is that they did not want to travel outside of the city [to exercise],” Green said. “You go to work, go home and then you don’t want to make another 20- to 30-minute trip, then exercise and drive back.”

Now, with Redbud open, Green said those looking to embrace a healthy lifestyle have no excuse not to exercise.

Green’s vision for the fitness center was to include design details that would give the building a welcoming feeling from the inside out.

The fitness center’s logo was hand-designed by fitness instructor and potter Jen Martin.

Around the building, hand drawn art work created by Taylor Mezer is already on display in the hallways, giving the fitness center a similar feel to that of an art gallery. A 27-foot panel, also created by Mezer, depicting the city of Grand Rapids will also be installed in the days to come.

“I wanted the facility to be comforting and eye pleasing,” Green said. “I just didn’t want it to be blah.”

Some other details that customers might appreciate might include a re-purposed ballet barre, which was originally from a ballet studio in Niles. Green said she has heard clients lament that the barre is particularly special because they attended that Niles studio as children and now are using it again in adult life.

In the childcare room, a colorful mural was designed by 17-year-old Cora Schau. Schau is also known as Miss Buchanan.

Plans for the fitness center first began in 2015 and construction began late that year. In addition to creating the 42,000-square-foot building, Green said because the property was not level, they had to put about 6 feet of soil fill across the three acres of property. This was one aspect of construction that she said was time consuming, but necessary.

Thirty employees were hired to run the facility. Seven of those jobs are full-time positions.