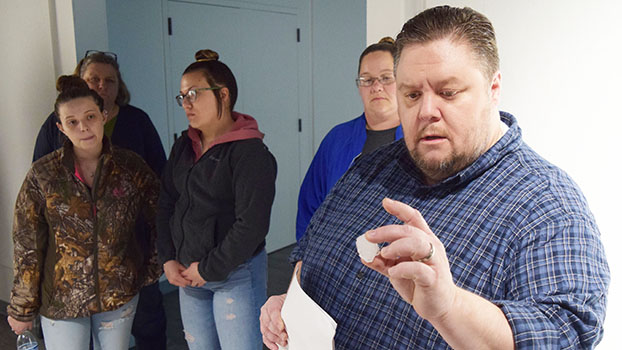 DOWAGIAC — True to chemistry’s core element of “change,” Southwestern Michigan College changed its art gallery into a chemistry laboratory through March 29 in room 108 of the Dale A. Lyons Building on the Dowagiac campus.

This exhibit explores possibilities of the gallery as lab — part exhibition, part experiment -— and revolves around five stations investigating hygroscopicity, crystallization, oxidation/corrosion, metallurgy/alchemy and solubility. The rear gallery displays working notes, lab journals, ephemera and recorded projection of a CHEM 202 lecture presentation on the formation of acetals and ketals. Visitors are invited to log observable data for hygroscopicity, the capacity of something to react to air moisture by absorbing or releasing water vapor.

“Navigate the show the same way I navigated science,” Schauer said. “Go to the first thing that catches your eye. As a freshman in college taking general chemistry, I had very little interest in chemistry. It wasn’t until I took organic chemistry that I fell in love with it. From that point on, I also became interested in things happening in general chemistry.”

Schauer encouraged visitors to think about the exhibit from the aspect of on-going change.

“I look for change,” Schauer said. “The Chinese symbol used to describe chemistry directly translates to change. If chemistry was static and stayed the same, nobody would care about it. Everything here represents some kind of change. Crystallization produces every mineral you can imagine — diamonds, rubies, quartz. Being able to create crystals is considered more an art than a science. Flat surfaces are due to the actual microscopic structure of chemicals that makes it up. For me, not only is change important, but also recognizing the link between what’s happening on the microscopic scale versus what you’re seeing in the real world around you.”

The exhibition is intended to be interactive, including visitor surveys, which Schauer said he is carefully reviewing.

“I was extremely shocked by one data point that’s pretty consistent throughout all of the surveys, and I’m trying to predict what the results will be,” he said.

DOWAGIAC — Southwestern Michigan College is offering an opportunity for students and community members alike to chase after their career... read more