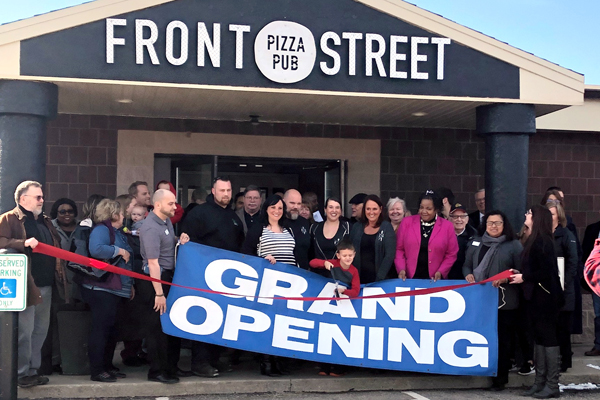 NILES — Wednesday afternoon, Front Street Pizza Pub was filled with people in business attire, chattering happily as they sipped on drinks and munched on snacks.
Although the scene was similar to most evenings in the restaurant, which quickly became a popular destination for beer and pizza after opening in the beginning of 2017, the Front Street Pizza Pub staff had a new occasion to celebrate: bouncing back from tragedy.
Members of the Four Flags Area Chamber of Commerce filled the pub to celebrate its grand reopening. The restaurant had been closed for nearly three weeks following the historic flood of the St. Joseph River.
Front Street Pizza Pub, located just up the hill from Riverfront Park at 510 N. Front St., in Niles, received less damage than some of the other establishments nearby.
“We were on an island by ourselves for the longest time,” said restaurant co-owner Cindy Cataldo. “The water didn’t come in until later. We didn’t have four foot of water in here by any means.”
Nonetheless, water damage forced the Cataldos to completely redo the walls and floors inside the building. Cleaning and renovating the building required weeks’ worth of labor, that Cataldo said could have taken much longer.
“I have a great staff that works for me that, before we could even get in here, had a game plan and calls made to get cleanup crews to come in,” Cataldo said. “I had volunteers, employees, family, all that came in and got it done. I can’t believe how fast we got it done.”
Cataldo said Front Street Pizza Pub employs more than 30 employees, which helped to get the restaurant back up and running quickly.
“We had a good handful that were here every day cleaning up, mopping up soot — everything,” she said. “They worked their butts off.”
In addition to the staff’s hard work, Cataldo said the Niles community came together to help the business get back on its feet.
“We had a stranger show up to help sandbag. I had a stranger pull up with a truck and trailer,” Cataldo said. “I had someone help out with a warehouse to help store equipment. The list was endless with the amount of help from the community.”
In spite of the devastation caused by the flood, Cataldo’s spirits were lifted by the event.
“As bad as it was, it was great to see the support we have,” Cataldo said. “It really showed me what Niles can be like.”
The restaurant reopened just in time for its annual St. Patrick’s Day bash. Beginning Friday, guests can celebrate the holiday outdoors under a large tent. Friday evening, popular Michiana band Blammo will perform, and Saturday DJ Nikki Boots will deejay the event.
Front Street Pizza also serves as the final stop of the Ava Zimmerman Poker Run Saturday. Cataldo said a live auction and other amenities will be available at the restaurant for those participating.
Those visiting for the St. Patrick’s Day bash will be greeted by the freshened up look at the pub, and also a freshened up menu.
“We took advantage of the time to update our menu, so we’ve got some new menu items,” Cataldo said. “We tried our burgers on Mondays, and they were hit, so now we’ve perfected it.”
Moving forward, restaurant patrons can take advantage of burgers — as well as the restaurant’s popular pizzas, sandwiches, calzones and appetizers — every day of the week.
“I just can’t say enough how much I appreciate this community,” Cataldo said.