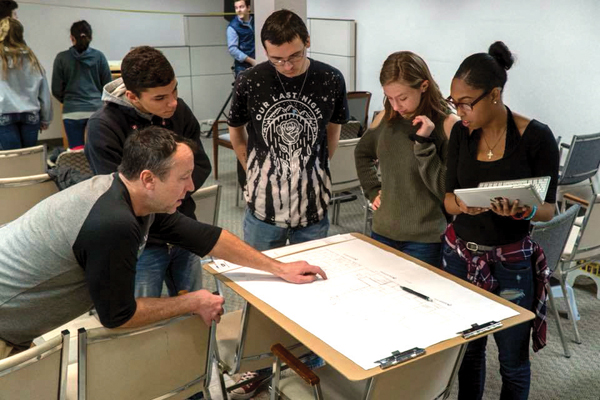 CASSOPOLIS — There is a lot that goes into starting a coffee shop. Spaces need to be renovated, bars and equipment installed and coffee supplies purchased. However, before any of that happens, the people in charge of the shop need to decide where to put it, and that is the exact step in the process students at Ross Beatty Jr.-Sr. High are currently going through.

On Friday, March 9 members of the student advisory board for the new student-run coffee shop toured three potential locations near downtown Cassopolis. The advisory board is made up with two students each from eighth, ninth, 10th and 11th grades.

“I think it went really well,” said Angela Piazza, superintendent of Cassopolis Public Schools. “We got some feedback from the students the day after. We talked to a couple of them. They really enjoyed it and found it meaningful. They love being at the beginning stages of this and seeing the different buildings and thinking of ideas.”

It was announced back in January that the school district, in conjunction with the village, had applied for a rural development grant, which would be used to help design and run the coffee shop.

They expect to find out if they received the grant between the end of March and early April. However, both the school district and the village intend to go forward with the project with or without the grant.

“The idea behind is the coffee shop is for it to be student run and student led. From the school’s side, [this helps them] move forward with their project-based learning,” said Emily Sarratore, Cassopolis village manager. “From the village side, we are looking to create space and a business in our downtown, which is why there is a marriage between the two. This truly is a student project that is supported by the village. This is really the students’ project.”

The three buildings that the students toured in Cassopolis were the former fire station, the former village hall, and a space on the main floor of the current village hall building. Each are owned by the village.

Joining the students on this tour were Piazza and other administrators from Cassopolis Public Schools, Sarratore, Village President David Johnson and architects and engineers firm Wightman and Associates, which the village has hired to do an assessment on the three buildings, as well as a few others.

“They picked their top two,” Piazza said. “The old village hall they weren’t even interested in, so I don’t think the architects and engineers are going to be doing anything with that facility. They’ll be looking at the firehouse and the current village hall and doing cost analysis there.”

The students may also want to look at other buildings in Cassopolis but, in the interim, it is time for them to start thinking about what they would like the coffee shop to look like.

“They had their next steps presented by the engineers and architects so they are looking on Pinterest,” Piazza said. “They are getting together some design ideas that they would like.”

Additionally, students and school administrators are planning to view several local “mom and pop” and national chain coffee shops to get ideas about what they do and do not want for their own shop.

The school district and the village expect that a decision on where to put the coffee shop will be made before the end of the semester. That way, construction and renovations can possibly commence during the summer.

DOWAGIAC — Though piles of snow are lingering on the ground, Dowagiac Rotary members got a taste of spring Thursday... read more