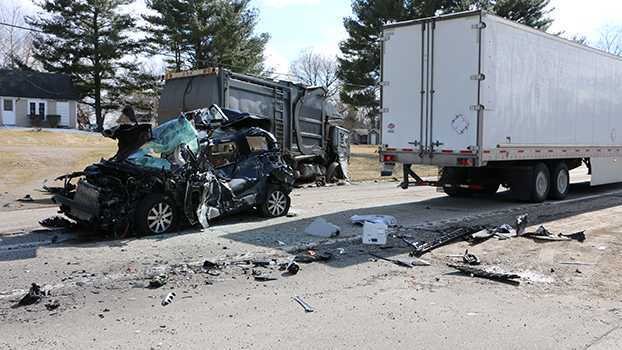 A South Bend man had to be extricated from his Dodge minivan after his vehicle was forced into another vehicle by a garbage truck. (Leader photo/Submitted)

One injured in three-car collision

BERTRAND TOWNSHIP — A South Band man had to be extricated from his vehicle following a three-car injury crash in Bertrand Township Tuesday, according to the Berrien County Sheriff’s Department.

At approximately 3 p.m. Tuesday, emergency crews responded to the crash on U.S. 12 near Sage Road and discovered Arnold Lancaster, 56, of South Bend, pinned inside his Dodge minivan. Lancaster was cut from his vehicle utilizing the Niles Township Fire Department’s jaws of life.

Lancaster was attended to by SMCAS Ambulance and transported by Medflight Ambulance to Memorial Hospital in South Bend with what was described as serious, but non-life-threatening injuries.

Lancaster had stopped behind a semi-tractor trailer on U.S. 12 while traveling west. The tractor trailer was stopped for a garbage truck that was conducting roadside pickup garbage service.

A second garbage truck, driven by Justin Hardt, of St. Joseph, was also traveling west and did not see the other vehicles stopped. Hardt did not stop his vehicle in time, swerved to avoid the collision, and struck the rear driver’s side of Landcaster’s minivan.

The minivan was pushed into the rear of the semi-tractor trailer, which caused extensive damage.

This case is still under investigation. Speed and alcohol are not believed to be factors in the collision.