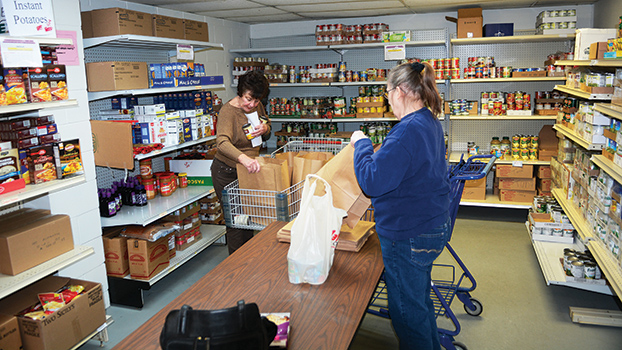 EDWARDSBURG — For more than 20 years, the Edwardsburg Food Pantry has been helping the community with its most basic essentials in times of need.

The pantry, which is open Mondays, Wednesday and Fridays, serves the Edwardsburg-Union area.

The volunteer-run pantry started small and has grown steadily throughout the years.

In the beginning, the pantry, which was started by local churches, helped only a handful of people each year.

As the need grew and people became aware of the pantry, the numbers grew. In the past fiscal year, the Edwardsburg Food Pantry served people in 470 households, which was a 5-percent increase over the previous year. With those households receiving groceries and other assistance multiple times a year, the pantry hosted 2,033 visits.

In 2014, the Edwardsburg Food Pantry expended $78,653 in groceries, utility and gas vouchers, as well as $2,411 on miscellaneous expenses.

More than 30 people volunteer to serve at the pantry, which is open from 10 a.m. to 12:30 p.m. three times a week at Our Lady of the Lake Catholic Church on US-12 east of Edwardsburg.

“Several churches wanted to team up together so that they could do more to help than when people would just come to their church,” said Scott Scheel, pastor of the Edwardsburg Presbyterian Church. “In 2011, we incorporated and became a 501c3. That was an important step in terms of growing and being able to do more of a community supported pantry. The whole community supports it now.”

Scheel said there are now six churches that support the food pantry regularly. There are also community organizations like the Lions Club and the Knights of Columbus. The Edwardsburg Public Schools host annual food drives to provide items for the pantry and the Edwardsburg mail carriers take part in the annual “Stamp Out Hunger” campaign. Businesses also take the time to donate money or provide food to keep the shelves stocked.

The need has grown, although Scheel said there has been some reduction recently.

“Especially in the years right after the start of the recession in 2008,” he said. “It has slowed a little bit in the last couple years, but it is still pretty high compared to pre-2008.”

Before 2008, there were volunteers that stopped coming due to the fact that they would sit there with nothing to do, but that is in no way a reflection of a drop in the need.

“We would love to get back to those days,” Scheel said. “That would be nice. I mean, really, that is the goal. In the meantime, we are happy to do it.”

And despite serving nearly 500 households, Scheel and the volunteers at the pantry know there are still more out there who are not using the service, some because they are embarrassed to admit they need help.

Volunteers are trained to make those who visit the pantry feel welcome and comfortable.

“One way is by just treating people with respect when they come in and not being judgmental,” he said. Then people will talk to people that they know. I had someone had visited her that when she came in she was in tears and that somebody here just calmed her down, gave her a hug and told her it was OK. She told her there was nothing wrong with coming here, but she had been raised that you do not do this. You do not come for help and she said she only had to come here twice to help her get back on her feet.”

Social media, such as the pantry’s Facebook page, is another way to get the message out to the general public, as well as traditional media sources such as newspapers.

“It is difficult to get the word out that it is OK to come here,” he said. “There are a variety of reasons to come here and there is no shame in coming here. It is something that is here to help people. We need to change the narrative.”

One client, a retired Edwardsburg resident, who wished to remain anonymous, has as story that is similar to many who come to the food pantry every two weeks to pick up food.

“I have a low income because I am retired,” she said. “I feed a lot of people in my family, so I come to the food pantry and they give so much. They have a list that you fill out and then they fill it with what you need. It is very helpful.”

The client said that when you come in everyone is nice and treats you with respect.

And what would she say to someone who is in need but not willing to ask for that help?

“It is natural,” she said. “I was kind of ashamed when I first came, but I need help and God gave me a way of helping me through other people. It is something that you just have to learn to accept when God gives you that helping hand.”

Ken Mais has worked as a volunteer at the food pantry for more than 20 years.

He has seen a lot of changes to the needs of people, the facility and the way the community has rallied around the pantry.

“Families are more accepting now,” he said. “Last Thanksgiving, we packed 540 bags for 180 families. I will always be amazed. The schools are involved now with their stuff-a-bus and all of the ministers are involved. The community helps out quite a bit.”

Mais, who usually works on Wednesdays and Fridays, said that it is important to get the information out to those in need.

What would Mais tell someone who is looking to volunteer at the pantry?

“They need to check with our coordinator Rick Sullivan,” he said. “You can talk to the ministers. You can leave your name and phone number, or you can stop by here Monday, Wednesday or Friday. We really enjoy working here. We go out for lunch together afterward.”

Cindy Antos is an administrative assistant at Our Lady of the Lake Catholic Church.

“Our Lady houses the food pantry and I do all the work behind the scenes,” she said. “I record all the gifts and all thank-you notes. Margaret (Evans) and Teri (Hassinger), who also work at Our Lady, between the three of us, kind of oversee all of the paperwork and processing of the stuff.”

Hope United Methodist handles the accounting for the food pantry.

“Our visitors can come every 14 days, so we have paperwork to support that to make sure everyone followed the rules we have set up,” Antos said.

She, like the others, is appreciative of the support the food pantry receives.

“Being in the office, I see where all the donations come from,” she said. “They come from memorials. We have businesses that support. We have band boosters help us get wrapping paper and tape for the Toys for Tots so that our visitors can wrap them and put them under their tree. Businesses take up fund collections or food collections.”

Fresh produce even makes its way to the pantry from local sources.

“We have farmers that will give us their produce,” Antos said. “We have a farmer who gives us potatoes that we use for our Thanksgiving and Christmas baskets. It is just a slew of people in our community that support and realize there are those who need a helping hand and can count on us to help reach them and give our visitors the support they need.”

Food is not the only thing visitors to the food pantry can get assistance with.

There are also gas vouchers, which can help get them to an appointment. Families in need can also get help with utilities.

While the money for things such as gas and utilities is limited, the pantry tries to utilize it as best as possible.

There is always an ongoing need for more donations, both monetarily and for food and household items.

Rangers hold off Homer in semifinals