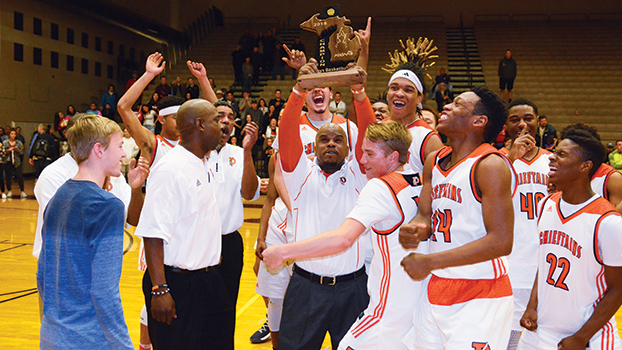 Dowagiac (16-5) advances to the regional round Tuesday at Coloma, where it will face Wayland Union, which upset Wolverine Conference champion Otsego.

“The kids have worked hard and we’ve talked about this moment all season long,” said Dowagiac coach Danum Hunt. “We got here, they stepped up and they rose to the challenge.

“Tonight, our thing was to try and push tempo and make (Paw Paw) play faster than they wanted to play. We felt if we could get them into the up-and-down game, and with our pressure, that it would work in our favor.”

The cat-quick Chieftains not only took advantage of forcing the Redskins to play at a faster pace, they also got a defensive effort from senior J.J. Smith that slowed down high-scoring Paw Paw senior Luke Tolliver.

Averaging 33 points per game this season, Tolliver was held to just 11 points and managed just nine floor shots against the aggressive defense played by Smith.

“J.J. Is a competitor and he loves challenges,” Hunt said. “He is our most outstanding and impactful player when it comes to getting the intangible things done. He may not put a lot of numbers on the board, but he’s going to rebound, he’s going to get the loose balls, he’s going to get the steals. I call on him to do the grunt and the grind work and he gets out there and he does it. We wouldn’t be here tonight if we it weren’t for the things he has done for us all season.”

“My role on the team is to play defense. I did what my teammates needed me to do and I got it done,” Smith said. “Being district champs is an amazing feeling. I never imagined doing this. I love this team.”

Dowagiac scored the first seven points of the game and never trailed. The Chieftains forced Paw Paw into six turnovers during the first 4 minutes, 29 seconds of the opening quarter and maintained the frenetic pace throughout the contest.

Paw Paw (11-12) remained within striking distance for the entirety of the first half, before a 3-point basket by senior Jamin Hunt staked Dowagiac to a 26-21 lead at halftime.

Two quick inside baskets by Paw Paw junior Karsen Barnhart cut the Chieftains’ lead to a single point, 26-25, during the opening minute of the third quarter and Dowagiac missed its first four floor shots to open the second half.

Leading 32-28, the Dowagiac trio of Lanier, Smith and senior Caleb Murphy reeled off 11 unanswered points and a 15-2 spurt to end the quarter, providing some much-needed breathing room during a physical battle between the two teams.

The Chieftains tacked on a 10-2 scoring run prior to the midway point of the fourth quarter, and meshed 11 of their 14 free throw attempts during the final eight minutes to seal the Redskins’ fate.

“Everything fell their way tonight,” said Paw Paw coach Rick Mitchell. “They’re an aggressive team, they’re tough, they get after it and I thought they manhandled us a little bit, but that went to their advantage because the referees were letting ‘em play. We didn’t have an answer for them.”

Jamin Hunt, who finished with 13 points for the Chieftains, including an 8-for-9 performance from the free throw line, was happy to be able to share the jubilation of winning a district championship with his father.

The balanced scoring effort is something that has marked Dowagiac this season.

“Our focus all year has been on total team effort,” Danum Hunt said. “We don’t want teams to be able to come in and focus or concentrate on one player. We want them to have to play us as a unit and as a team. The guys are very unselfish and everybody knows their role. When one guy is ‘on,’ they know to get the ball to him. We’ve been winning that way all year. It’s been amazing and exciting. I’m so proud of these guys. It’s because of their work.”