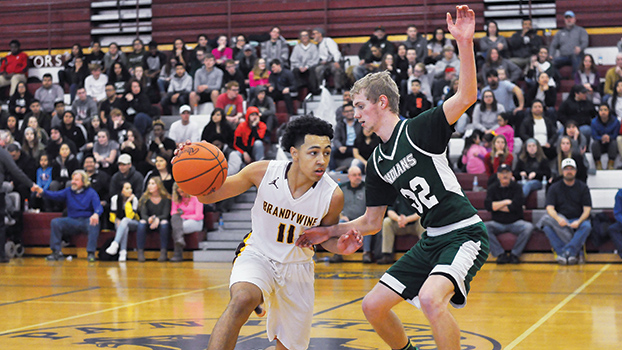 Brandywine’s Shane Brown (11) tries to get past a Hartford defender in the Bobcats’ win over the Indians in the Class C district semifinals Wednesday night. (Leader photo/ERIKA PICKLES)

In the semifinal round played Wednesday night, the Rangers breezed by Eau Claire, 95-44, while the Bobcats sealed the deal with a 62-44 final over Hartford.

Coming off the bench for a game-high 24 points, Cass’ Darrion Gaston played a big role in helping to advance his team, while keeping the Rangers undefeated.

Cassopolis (22-0) spent most of the second half with a running clock, leading by 40 points or more to put the mercy rule into effect. The Beavers ended their season winless, 0-21.

“We got the win,” said Cassopolis coach Ricky Evans. “We survived. It feels good.”

The Rangers blasted through the first quarter with a 31-0 lead. At halftime, they were up 45-14 and ended the third unreachable, 73-30.

“I was really pleased with the way we pressured them,” Evans said. “We were more focused than I thought we might be.”

Cassopolis’ Walter Lee scores a pair of the Rangers in their 95-44 win over Eau Claire in the Class C district semifinals. (Leader photo/ERIKA PICKLES)

Other top players for Cassopolis were Tyrese Hunt-Thompson with 19 points, seven steals and seven rebounds, Devin Jennings with 18 points and 11 rebounds and Xander Smith ending with 12 points.

Having a chance to see its next opponent play, Brandywine coach Nathan Knapp knows his squad will have to bring a tough defense against the Rangers.

“They’re quick and athletic,” Knapp said. “We are going to have to play smarter than we did tonight and bring our A-game Friday.”

Although his team led by a 10-point or more margin for most of the game against Hartford, it was clear Knapp was frustrated throughout much of the 32-minute semifinal contest.

“I’m upset because we are a better defensive rebounding team than we showed,” he said. “We didn’t play smart, we didn’t box out, we got into foul trouble and we opened the game missing seven lay-ups. We can be so much better. That’s what I’m upset about.”

One highlight for Knapp was his team’s overall defense, saying his squad battled all night and played hard. Another was the fact that every player for Brandywine entered the game.