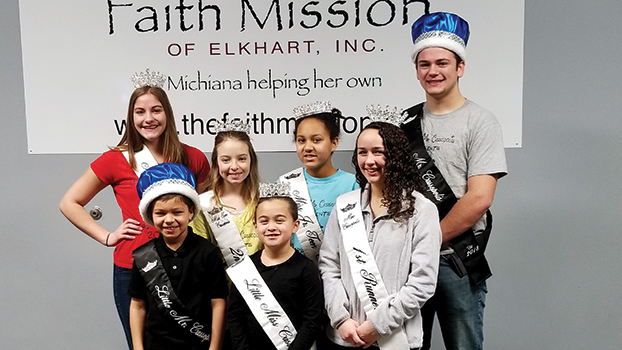 Miss and Mr. Cassopolis are pictured at various events this year. (Submitted photo)

CASSOPOLIS — So far this year, the Miss and Mr. Cassopolis program has been busy making appearances all over the community.

Members of the program went to the Dowagiac Ice Festival and met with The Miss Dowagiac Court and the Miss Heart Court. Some of the court competed in the Caruso’s ice cream eating challenge, where Chance Cook won a gift certificate for the adult division.

They made an appearance at the chili cook off at Our Lady of the Lake Parrish in Edwardsburg, where there was also an auction.

The court appeared at the basketball game and taco fundraiser for Michigan State Police Officer Aaron Steensma. Miss Cassopolis Hailey Wellman and 1st Runner up Selena McGrew were on WSBT 22.

At Faith Mission, members of the court served food to the homeless.

Brandywine gets revenge against Bronson

BRIDGMAN — What a difference a year makes. The Brandywine girls basketball team avenged a loss to Bronson with a... read more