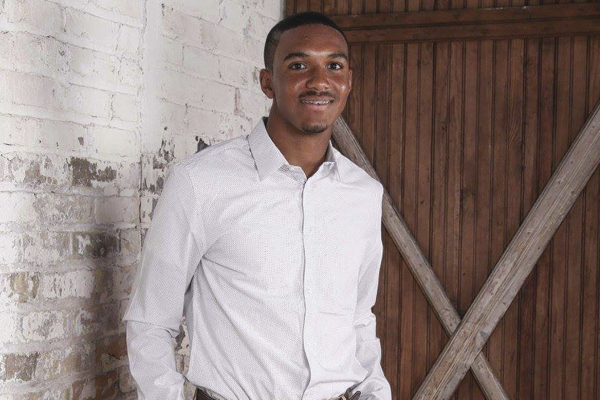 For most of his life, those who know Brandon Anderson would agree that his heart bled blue, white and black — beating stronger and stronger each year with Ranger pride.
Reflecting on the last 17 years, many of Anderson’s fondest memories are lined in these colors — of blue and white porch lights illuminating the streets of Cassopolis, as he and his teammates departed for games in the state tournament.
They were found in seas of fans alongside the football field or basketball court, cheering on small, but mighty teams in all kinds of weather.
They were the colors that filled locker rooms, team buses and pep rallies, a bold “7” printed on polyester, a symbol interchangeable for Anderson’s name on the field.
“I’ve always really been focused on giving Cass good representation and bringing positivity to the school,” Anderson said.
A promising athlete, Anderson earned varsity letters for two sports as a freshman, and a third varsity letter his sophomore year. Depending on the time of year, Anderson could be found on the football field or in the weight room, on the basketball court or running the track.
Drawing on lessons he learned while playing sports, the 17-year-old senior says he works hard to set an example for younger students, exemplifying the principles instilled in him by coaches through hard work and discipline.
“Because of sports, I am dependable and accountable and responsible,” Anderson said. “I think that’s what our coaches tried to instill in us. They taught us to put in 110 percent every day.”
Despite his class-clown tendencies, Anderson said he has always been a dependable student, earning straight A’s throughout high school.
In addition to pulling good grades, Anderson felt it was important to give back to his community, and make an impact on his classmates and future generations.
Anderson is part of a student-led youth advisory council at his high school, which emphasizes health and wellness among the adolescents there. As part of the student wellness awareness team, Anderson said he feels it is important to support his classmates and communicate ways to help those in need.
“We bring awareness about bullying and sexual abuse and things like that,” Anderson said, emphasizing that these difficult conversations are often better handled when discussed among peers.
The group organizes a variety of events and efforts to share important messages with students at Ross Beatty High School.
“When I was a freshman and a sophomore we held — once each year — a ‘Wellness Day’ at our school,” Anderson said. “We had different sessions set up where we would go around and learn about different things, like there was a kickboxing class, and then there was one on healthy eating.”
His junior year, the wellness awareness team hung posters and handed out flyers, drawing awareness to various issues, such as sexual assault.
“Bullying is probably the biggest [issue],” Anderson said. “It’s not a big thing at Cass because everybody knows everybody, but we want everybody to be able to share and be open about it. I know it made a difference because we had students that would go to our wellness center and talk to the doctors or talk to our guidance counselor.”
More than anything, Anderson said he will miss the impact he was able to make on the Cassopolis school district, which he attended his whole life.
“I’m going to miss being a mentor to the younger students and being able to help them and coach them on different things,” he said.
After high school, Anderson plans to attend college to study business and marketing, and hopefully bring the same passion he had for his school to entrepreneurship and building other business.