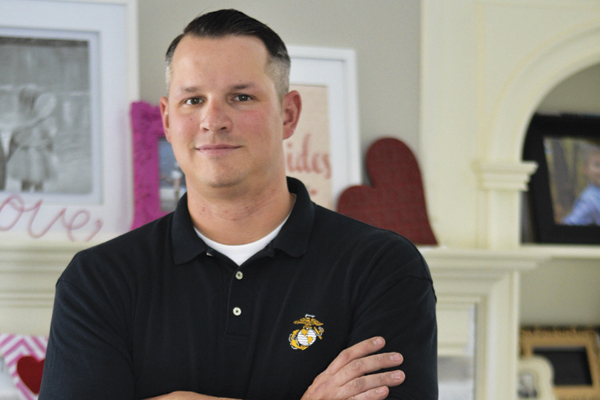 Since I’m only about a year and a half older than my brother Donny, I can attest to the fact that from the time he was really young, he was looking out for the people he loves.  We’re talking as a 3-year-old telling the doctor to back off when our baby sister needed her shots.
I can remember him standing up for me in grade school when I was picked on and all the way up to when I called him one day when I was 27 and asked him to drive three hours to pick me up and move me home when I needed help.
Donny is a protector — to the core.
I think of this part of his personality translated into courage as he grew up.
Everyone has a different reason why they might run toward danger when others flee, but I’m quite certain that his drive to protect those he loves as well as those that cannot protect themselves led to his decision to join the United States Marine Corps.  Donny left for boot camp shortly after Sept. 11, 2001 and he knew what was going to happen after he finished training.  I’m sure he was concerned for his safety, but he was steadfast in his desire to do what he could to defend the United States, and his family.
He completed two tours in Iraq and finished his commitment to the Marines.  He returned home and resumed civilian life.
The scars Veterans carry are not all visible.  Donny struggled in silence with the weight of his service to our country for several years.  Now he discusses his own battles, and it’s hard to face that kind of pain.
His courage to discuss his experiences has morphed into dialogue in our community about the need to reach out to others that may be suffering silently.
Proud isn’t a big enough word for how I feel about my brother.
— Bethany Cowan

Firefighter Doug Michels has been serving with the Dowagiac Fire Department since 2009. Prior to that, Doug was a member... read more