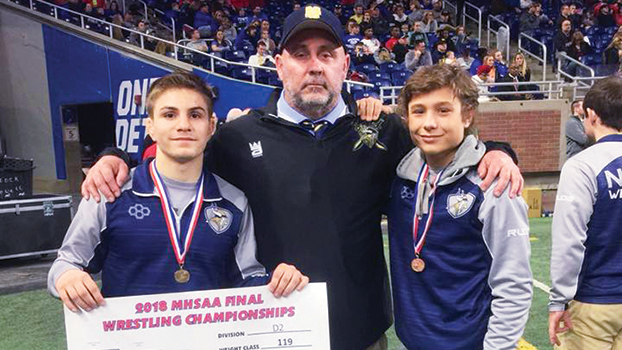 DETROIT — At last, a state championship.

Niles senior Austin Franco has quite a wrestle resume. The only thing the four-time all-state wrestler was missing was a state championship.

Franco reached the championship match by pinning Nick May of Kenowa Hills in 1:06 in the opening round, decisioned John Sosa of Gaylord 8-2 in the quarterfinals and pinned Eric Pawlaczyk of Imlay City in 1:06 in the semifinals.

He ends his career with a 163-5 overall record.

Franco, who wrestled at Lakeshore his freshman, sophomore and part of his junior season, transferred to Niles over Christmas break of 2016. He wrestled the second half of the 2016-17 season for the Vikings and helped lead them to the Division 2 state championship weekend.

He was a state runner-up at 112 his freshman year and was a third-place finisher as a sophomore.

Last year, Franco lost a 6-3 decision to Gilbraltar Carlson’s Brandon Proudlock. Proudlock defeated Franco in the second round of the state tournament his sophomore season as he would go on to be a two-time state champion.

Hesson said when Franco finally won the championship, it was a combination of excitement and relief.

“I think it was a little of both,” he said. “When you first do it, it is just so exciting. He was excited immediately after the match and energized. And then, I think as we walked off and we talked, that is when the relief came through.”

Hesson was equally happy for Zimmerman.

“Jamison did a great job,” he said. “Jamison has bought into what we do. There are no questions. We put out a plan. It is a simple plan, but it is not easy and he followed it and it worked out great for him this weekend.”

It was the second state champion for the Vikings under Hesson. Kenyon Ellison won the 285-pound championship in 2007.

Niles’ Jamison Zimmerman (36-13) also earned all-state for the Vikings as he finished fifth at 103-pounds.

Zimmerman won 2-0 over Corbin Hallberg of Ortonville-Brandon in the opening round and won by major decision over Trevor Marsman of Cedar Springs 15-5 in the quarterfinals.

He was defeated by Lakeshore’s Riley Bettich in the semifinals.

Edwardsburg’s Nick Bradley (32-5) also finished fifth in the state as he defeated Carsen Cuthbert of Holly 2-1.

Bradley won his first two matches at 145 pounds before falling in the championship semifinals in sudden victory 3-1 to Austin Boone of Lowell.

Brandywine’s Hunter Heath won his opening round match at 112 with a pin of Gabe Fielder of Durand Area in 2:37, but dropped his next two matches and was eliminated.

Patterson comes up big for Vikings once again

NILES — Sophomore point guard Alycia Patterson is never going to be the biggest player on the court, but if anyone... read more