Inside the minds of Dungeon Masters 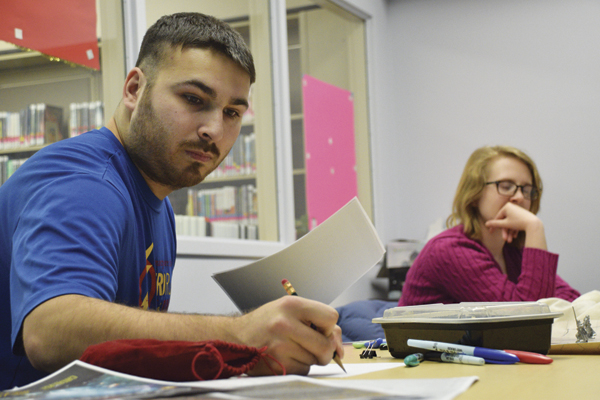 In the crushing, yellow glow of the darkened city, the red neon lights accenting the exterior of “McHugh’s” fast food joint drone with a deafening thrum.
Inside, past the thin, plate-glass windows, an attractive young elf is propped on her elbow against a dingy wall next to an interactive order console.
She spots her quarry, a local mobster named Vic Fratelli, sucking down a grease-ball burger in the far corner of the “restaurant,” surrounded by his crew.
The elf saunters toward Vic.
When she’s within 3 meters, her partner — a Rigger in the van out front — uses his brain to command a tiny spider drone to slip from her pant cuff to monitor the conversation.
Vic looks up from his burger. A splotch of condiment stains his lapel.
“George Hampton says, ‘hello,’” the elf says.
Vic and his crew spring from their seats at the macroplast tabletop and draw their guns.
Welcome to the game world Shadowrun.

Happy accidents
“That means you’re ‘sending them a message,’ and want to fight them,” says Niles resident David Hollister, the player of the Rigger.
“I didn’t mean to do that. I just wanted to talk!” says Emily French, the elf player, also of Niles.
The group shares a laugh, but now it’s up to the Dungeon Master, Earl Shaffer, to figure out what happens next.
The three are sitting in a study room at the Niles District Library, the fluorescent lights above humming along like the “McHugh’s.” The study tables have been jammed together in an awkward sort-of rectangle to facilitate the playing mat that serves as the “McHugh’s,” along with dice, paper, books and mini-figurines.
Like all pen and paper games, Shadowrun is all about imagination and consequence of action.
“[As the Dungeon Master] I have to decide: is [what the players want to do in the situation] a neat idea or is it a stupid idea,” Shaffer says. “If it’s a neat idea, even if it doesn’t work, how can I twist it in a way that works because it’s just really cool? Or is it stupid and no, you deserve the three guards who are now punching you in the face?”
Shaffer, a Niles resident, has been playing Dungeons and Dragons — the fantasy pen and paper game — for 16 years, and he has taken on the role of Dungeon Master for about 14 years. But tonight is his first game of Shadowrun.
Shaffer feels moderately comfortable running the module, though, because of his experience with D&D.
“The biggest difference [between D&D and Shadowrun] is learning the new system,” he says. “D&D is fun and easy!
“I’m kinda in a little bit over my head sometimes with Shadowrun,” he says. “I can roleplay it all I want, but then I don’t know what kind of mechanics come with [those actions].”
In pen and paper games, the Dungeon Master takes on the role of creating worlds for players and nonplayer characters to inhabit, and  is tasked with creating adventures for players to explore. They also control the monsters in a campaign and act as referee by adjudicating rules.
Dungeon Masters are not the enemy of the players. Rather, they are the conduit by which the players use their imagination to engage in a living, breathing fantasy world.
Shaffer says that he started DMing his games via modules — professionally prewritten campaigns — but soon started making his own worlds and adventures for his group.
The group he plays with meets each Sunday for about six to eight hours of gameplay, and to prepare for that, Shaffer says he needs to spend about three to four hours of preparation beforehand.
“I’ll pull open a notebook and go through and jot down some monster stat blocks so I’m not flipping through the book a bajillion-and-a-half times,” he says. “I’ll try to aim long-goal, so if they try to do something ‘stupid’ and jump over a castle wall and throw away everything I’ve worked on [for the last four hours] I’ve still got something [for them to do].”
Everything starts with a map. Once the bones of a dungeon are in place, Shaffer says he starts looking for interesting monsters to populate the area and harass the players.
He will build loosely toward the long goal of his story arc if possible, but he is aware that the players will likely come up with ludicrous solutions to the problems he carefully crafts to foil them, and he is going to have to come up with new story details on the fly.
“I like the off-the-cuff stuff. It’s the most fun,” he says. “I’ll usually get a really good framework and try to make a dungeon really well, but it’s constantly changing.”

A critical role
Andrew Huffman, of Edwardsburg, is a fairly new Dungeon Master; he started running his own full campaign about three months ago, but he has been playing D&D for one-and-a-half years.
Huffman plays with his family and friends, including a lite version of D&D with his 5-year-old daughter, Alice, nearly every day.
“The things I would include in a regular D&D session I tone down, but I don’t want to tone them down too much,” he said. “Even though it’s roleplaying and a fantasy setting, it’s good to try to include, I think, real world situations that kids, like Alice, might actually run into. Just a typical example of how to deal with a bully and ‘how would I react to that?’”
By playing D&D with Alice, Huffman says he is able to use the game mechanics to teach her patience as well as simple math, and he uses it to foster her imagination. Huffman also uses the storytelling aspect of the game to let Alice explore actions and consequences.
“As a kid, Alice doesn’t always think through her actions and how people might react to it,” Huffman said. “Roleplaying is a great avenue to explore what could potentially happen, and she learns that there are always different ways of doing things, and that some of those will be better than others.”
Huffman explains that in one gaming session, Alice’s character encountered a dragon, which she immediately attacked. After Huffman acted out the dragon reeling and writhing in pain, Alice realized she hurt the dragon and felt bad for inflicting pain. She decided to put a Band-Aid on the wound she made in the dragon, and proceeded to speak with it and make it her friend.
The skills Huffman uses as a Dungeon Master are infinitely transferable, so he is able to create stories and worlds based on Alice’s favorite characters and cartoons in order to make it relatable to her.
Through the stories and worlds Huffman creates and repurposes, he is able to place Alice and her characters in real-world situations (such as dealing with a bully) and allows her to work through possible ways of dealing with the situation before she ever comes across it in life. Huffman says he hopes it will help build a positive ethical framework for his daughter that she will carry with her through life.
“I think that by getting [children] involved in roleplaying and letting them act out their character — because their character comes from their own mind — and seeing the choices that their characters make, even though they might not react the way that they themselves would, it’s part of [seeing a child’s] thought process and it’s healthy,” he said. “It’s a great opportunity to come together as a family and spend time together.
“Some families play Monopoly or Scrabble, and some families play Dungeons and Dragons.”

What will you do?
For players of pen and paper games, a large part of the draw comes from the ability to make choices in an epic setting while participating in fantastical adventures — a lesson Alice is learning at a young age.
There is no doubt that, to further the story, the Dungeon Master will ask the players: “What will you do?”
As Shaffer and Huffman explain, for the Dungeon Master, it is a moment of total fear and great joy.
“My favorite parts are when the party does something cool and unexpected, and they think they’re beating me. I love that part, when they think they’re beating me,” Shaffer says. “You never want to just kill them; you never want to make anything so grueling that it sucks for them. But you want to make it challenging enough. When you make it challenging enough and they still find a way to get around it and they’re super happy about it, that’s what I enjoy.”
After having spent more time on the other side of the Dungeon Master screen as a player, Huffman is realizing what it is like to be put in the hot seat and have five players stare at him expectantly while he has to think of an answer to their questions off the cuff, and how exciting that can be.
“The most fun is when you plan something, and the party does something completely different from what you expected and you have to react to it on the fly,” he says. “The other most fun thing [about being a Dungeon Master] is when you have something happen, and you’ve had this event planned, and you see your players react to it in a very positive way.”
Huffman and Shaffer both suggest that if people are interested in getting their own D&D campaign up and running, they do not need anything more than a pen, paper and a few dice. Wizards of the Coast, the company that owns Dungeons and Dragons, offers many free resources — including the basic core rulebook, which will allow players to get started — on its website at dnd.wizards.com.
As for the story of Vic Fratelli, our elf heroine and our Rigger, the battle, unfortunately, did not end before the evening of gaming did. The end of that story, dear reader, will be left entirely up to you. The endless options of choice and possibility imbued by the power of imagination are the true draw of these games.