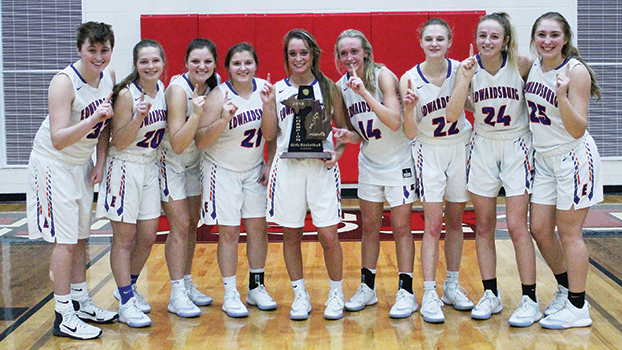 A year ago, he watched his Eddies fall in the Class B district championship game to Three Rivers, a team it had beaten twice during the regular season.

But Friday night when the same two teams competed for the same title, the Eddies parlayed defensive intensity into offensive execution, and gained redemption with a convincing 44-28 victory over the Lady Cats.

“It’s incredible. I’m not sure what would have happened if the role would have been reversed and we would have lost again. It’s been a long year,” Pobuda said.

“This year, from day one, we’ve been telling the girls, ‘One game at a time,’ but in my mind we’ve been playing for this game all year.”

“After all the hard work over the summer, it’s nice to finally get this championship and get redemption on them,” added junior Kaitlyn Zarycki, who scored a game-high 20 points. “I think my team deserved every bit of it, because we all work so hard.”

Edwardsburg (21-1) advances to the Class B regional tournament next week in Hopkins where it will face Allegan at 5 p.m. on Tuesday.

Three Rivers turned the ball over on its first three possessions Friday night, and Edwardsburg assumed a lead it would never relinquish.

The Eddies turned nine first-quarter turnovers by Three Rivers into eight points and held a 13-6 lead after eight minutes had elapsed.

With a suffocating 2-3 zone defense that made it virtually impossible for Three Rivers to work the ball inside, Edwardsburg scored the first eight points of the second quarter.

“We wanted to keep on them all, contest everything, be in our spots, get our rotations and just play defense like we have all year.”

Three Rivers was sparked by freshman Alivia Knapp midway through the second quarter. Knapp came off the bench and scored seven straight points to fuel a 12-2 run, but Edwardsburg took a 25-16 lead at halftime.

Zarycki scored 10 points, including six free throws, during the third quarter and the Eddies extended their lead to 37-24 heading into the final eight minutes.

Three Rivers opened the fourth quarter with five straight missed floor shots and Edwardsburg played keep-away for a good portion of the final frame after opening with seven unanswered points.

“We knew we were going to have to rebound the basketball real well, play well in the half court and make some special plays,” Three Rivers coach Jason Bingaman said. “We were able to hang around a little bit, but we just weren’t able to get consecutive good looks.

Sophomore Abbey Krugh complemented Zarycki’s offensive performance with 15 points of her own, and Edwardsburg shot 33.3 percent afield (14 of 42).

“She’s a great player; great shooter,” Zarycki said about Miller. “Me and Alexa (Markel) had to work our butts off to try and stop her.”

Edwardsburg forced Three Rivers into 25 turnovers and scored 19 points following the miscues by the Lady Cats.

DOWAGIAC — The Dowagiac boys basketball team will have to put the disappointment of losing the Wolverine Conference championship behind... read more