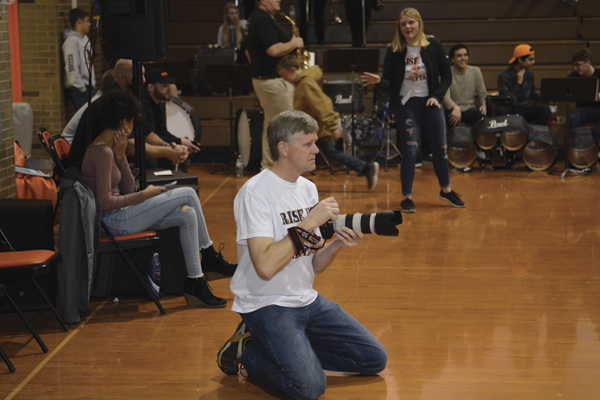 Dowagiac man gives back with passion for photography

Amidst a renovation project in his Dowagiac home, a long lost memory buried deep in a box of forgotten documents brought tears to Scott Rose’s eyes.
Discovered by his wife, Leslyn, the piece of paper appears to be nothing more than a receipt, faded numbers and information detailing a purchase made 40 years ago this spring. To Rose, however, the artifact represents a memory that sparked a lifelong passion — a hobby that bonded him to his father, who passed away last year.
Scott’s father, David Rose, was known for his giving heart and his love for coaching and for teaching, among other things. As he grew older, though, Scott realized his father’s knack for taking pictures.
“He always had a camera in his hands,” Scott said.
Scott recalls borrowing his father’s camera to capture the Blizzard of 1977, trudging through the snow to get the perfect shot of the historic snowstorm.
Following in David’s footsteps, Scott took a photography class his senior year, using his father’s camera to snap pictures on class trips and other adventures.
“For a graduation gift, [my dad] took me to a camera store and said, ‘Scott, I want to get you a camera, but I want it to be a little bit better than the one I have,’” Scott said, stifling tears as he recalls his father’s generosity.
So on May 26, 1978, 18-year-old Scott and his father explored the shelves at Prater’s camera store, picking up various Fuji models (the brand suggested by Scott’s teacher, Mr. Walls) and testing the features. Eventually, Scott picked up one camera and said, “I kind of like this one” — an all-manual camera he remembers like the back of his hand.
“It had a stick that went up and down on the right of the viewfinder,” Scott said, miming a motion one would use to click a camera shutter. “To push the ISO, which was called ASA back then, you had to turn the knob for your film.”
Although Scott took a brief hiatus from photography (other than taking photos of his wife and children, Justin and Kristin), when digital cameras began growing in popularity in the early 2000s, he dove headfirst back into his former passion.
Now, any given night of the week, Scott can be found on the sideline of a sporting event, knelt down in front of a stage at a Miss Dowagiac pageant, or capturing memories at a choral performance, so much a fixture in these locations that most everyone in the community knows him by name.

A Chieftain heart
Much like his father, Scott is well-known throughout his community not only for his love of photography, but for his love for helping others. His Facebook page, Photography by Scott Rose, has more than 1,200 likes, and is filled with thousands of photos Scott has taken of Dowagiac students, all of which he shares for free.
“Scott is a very humble individual who puts in long hours by investing in the community’s youth,” said Tracy Urbanski, who coordinates the Miss Dowagiac pageant. “He stays back in the shadows celebrating their accomplishments and supporting all they do, with little recognition.”
Scott began photographing the Miss Dowagiac pageant several years ago when his daughter competed. He realized in the middle of the pageant that he had not actually watched more than five minutes of the event, as his face was behind the lens the entire night.
“I thought, ‘if I can provide these pictures so people can actually watch the pageant and not miss their lovely ladies, how great would that be?’” Scott said.
Scott shared a love for athletics with his father, who coached both boys and girls basketball teams at Brandywine. David often hosted basketball clinics, where he would teach athletes of all abilities how to play the game.
“He never turned anybody away,” Scott said. “He wanted to help everybody.”
Scott is also often found on the basketball court (and at most other athletic events), but instead of coaching athletes, he captures memories for them.
“I like going to sporting events, not only getting the athletes pictured, but also the kids in the stands,” he said.
Because he attends such a wide array of events, Scott said he can watch students grow up simply by looking through his photo archives.
“For kids I know who are graduating, I try to put CDs together with photos of them at different events,” he said. “I’d say I give away about 15 or 20 at the end of each year.”
Scott takes professional senior portraits for several graduating seniors, and this year, decided to offer his expertise for free to seniors having trouble getting senior portraits. One day last fall, Scott set up a studio in the high school and invited seniors to take their yearbook photos.
“There are a lot of kids in a lot of families that don’t have the means to put the time and expense into capturing these memories,” Scott said.
Like his father, Scott feels it is important to use his skills to help others.
“He was always doing things for other people,” Scott said. “I want to do that, too.”

In the elements
When Scott is not photographing students participating in extra-curricular activities, he is likely to be found hiking through the woods, capturing images of the sun reflecting off a creek, or carefully trudging through the snow to snap photos of icicles on the St. Joseph lighthouse.
For 34 years, Scott has worked at Cook Nuclear Plant, most recently in the environmental department, where he is often immersed in nature. He carries this passion for the outdoors with him after hours, often bringing a camera along on his ventures.
Last winter, Scott was able to cross an item off of his photography bucket list when he captured snow coating a thistle plant. In the images, the plants appear to be illuminated by snowflakes dropping all around them, creating a mystical winter scene.
“It had to be snowing, and there had to be snow sticking,” Scott said, describing his process. “I had to cover [the plants] with plastic bags to catch the shot, but I got it.”
Other photos show dandelions backlit by a sunset, or horses grazing in a pasture.
Scott said, to the outsider, he might look a bit crazy while trying to capture
the images.
For example, one fall evening, Scott captured a series of photos of Dowagiac’s downtown corridor in the rain.
“They had just streetscaped the area, and it was a beautiful thing to capture,” he said. “I lit a couple of speedlights and had to crawl around on the ground. I’m sure there were some people who thought I was a wacko.”
In another photo, Scott wanted to capture a shadow walking across a Dowagiac street.
“I was the only one around, so I set my timer and I walked in slow motion,” he said, miming a slow-paced walk. “I got some funny looks.”
Scott said he does not care how silly he looks while capturing a photo; once he has an image in mind, he commits.
Like his father taught him decades ago, when he finds a passion, he pours his heart into it, and the Dowagiac community feels fortunate to share his talents.

Local jail ministry transforming lives of those in need

Elkhart’s Angelo Sebeck does not claim to be perfect. Growing up in New Jersey, Sebeck got into his fair share... read more