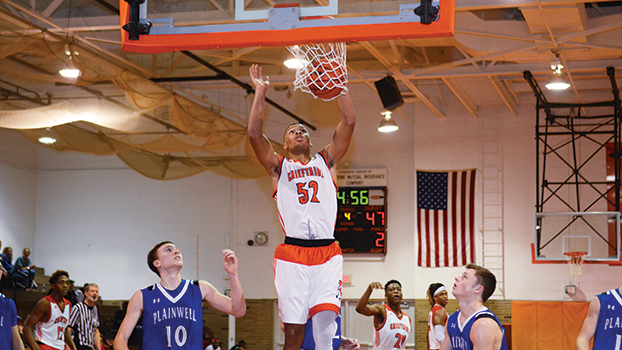 DOWAGIAC — The Dowagiac boys basketball team will have to put the disappointment of losing the Wolverine Conference championship behind it.

After all, there are bigger fish to fry beginning Wednesday night in the Class B district tournament hosted by Three Rivers.

The Chieftains (14-5) will face Wolverine Conference foe and host Three Rivers in the second game at 7 p.m. Wednesday.

Edwardsburg will face the winner of the Paw Paw-Vicksburg game in the first semifinal at 5:30 p.m. Wednesday.

The winners advance to the championship game scheduled for 7 p.m. Friday.

Dowagiac coach Danum Hunt believes that Paw Paw and Vicksburg could have a say in who wins this year’s district title.

“I think that they have the ability to make an impact during the tournament,” he said.

Paw Paw and Vicksburg square off in the opening game of the district tonight.

Hunt said that the key to getting past the Wildcats on Wednesday is two-fold.

“The key is being disciplined and consistent in executing your game plan,” he said.  “You also have to be prepared to make adjustments. The other teams have had an opportunity to do their homework and are more prepared during tourney play than they were during the regular season.”

Being that the entire field consists of Wolverine Conference teams, Hunt knows that the competition is about the same for all the teams.

Having played Niles and Benton Harbor in non-conference contests, hopefully will give the Chieftains a leg up on the competition.

“We’ve had a season of challenges, both on and off of the court,” he said. “I think that those challenges have helped us grow, come together as a team and helped us become mentally tougher. Adversity has prepared us for moments such as these. Ready or not, it is time to play.”

Undefeated Cassopolis  (20-0) will begin defense of its Class C district championship with a home game tonight.

The Rangers will host former conference foe Bridgman at 7 p.m, with the winner advancing to the semifinals at Watervliet High School against Eau Claire.

Cassopolis coach Ricky Evans knows that every team in the Watervliet field will have its eyes set on knocking off the undefeated Rangers.

“I have respect for all of them. Any one of these teams can win district,” he said. “We are playing against teams that don’t care about the name on your jersey. The teams we are playing are coning after us. They are going to play their best basketball against us, so we had to step are game up.”

The championship game at Watervliet is scheduled for 7 p.m. Friday night.