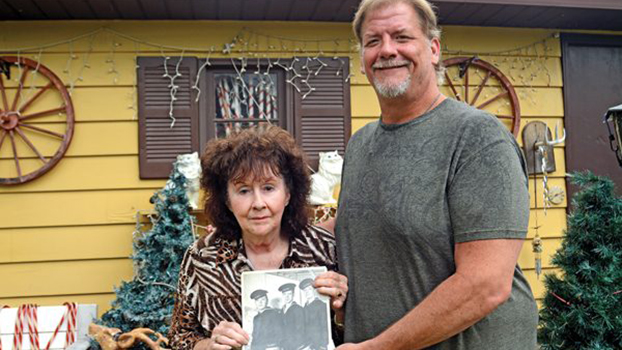 From left: Rosalie Stephens and her son, Joseph Stevens hold a photo of atomic veteran John Stephens, who is among those pictured in the photograph. (Leader file photo)

NILES —  For more than two years, Joseph Stephens, of Niles, has been working tirelessly to advocate for a bill that will recognize the service of veterans exposed to ionizing radiation from atomic bombs.

The bill, called the Atomic Veterans Service Medal Act or H.R. 2754, was created by the National Association of Atomic Veterans and has stalled in the U.S. House Committee on Armed Services. If it passes, the act would recognize atomic veterans with a medal.

Joseph’s father John was among those who unknowingly was exposed to radiation during Operation Crossroads — a government test initiated to study the forces of nuclear bombing.

John was 16 when he joined the Navy and became a seaman assigned to the project. John was given the opportunity to participate in an undisclosed assignment which he was promised would earn him two years of service, while only having to serve one.

When test bombs “Able” and “Baker” were detonated in 1946 — John was less than 20 miles away waiting to study the bombs’ impact. He wore no protective clothing — only jeans, T-shirt and a Navy hat.

In 1989, John was diagnosed with lung cancer, which Joseph and his mother Rosalie believe was a direct result of his exposure to radiation during the Navy operation. In 1993, John died after battling lung cancer.

For Rosalie, having a medal to hold in her husband’s name would mean some acknowledgement of the dangers John was unknowingly exposed to.

“I would feel like [John’s] participation was worth it,” Rosalie said.

For Joseph, the medal would also have significant value.

“It would mean closure,” he said.

U.S. Rep. Fred Upton (R-St. Joseph) has decided to co-sponsor the bill, after he heard about what John went through by reading a local news article.

“I was elated when I heard that,” Joseph said.

But after hearing that the bill has once again stalled after being introduced to the senate and house last May, both Joseph and Rosalie said they are frustrated.

Joseph said they do not have much explanation as to why the bill has stalled, but they have heard from sources at the National Association of Atomic Veterans that Committee Chairman Sen. John McCain (R-AZ) is opposed to passing the bill.

“The last three times this bill has been introduced, he [McCain] has blocked it,” Joseph said.

Joseph said he has attempted to contact McCain and ask him why, but has yet to get a response outside of “no comment.”

At this time, Joseph said there is little he can do except continue to advocate for the bill to local legislators. He is asking others to join him in this conquest.

Keith Kiefer, the National Vice Commander for the National Association of Atomic Veterans, Inc. said the bill can remain in the stall phase until December. If no action is taken on it at that time, the bill will have to be scrapped and the process will start over.

Kiefer said he has heard some who are opposed to the bill say that if atomic veterans are recognized, then the nation will have to do the same for other service members. He described this as a “weak argument.”

“Ionization is like an invisible bullet,” Kiefer said. “[Except] you don’t have an entry or exit wound. These veterans aren’t asking for a Purple Heart. All they are asking for is recognition for service and the sacrifice that they and their families made.”

Keifer said he will be traveling to Washington D.C. to meet with leaders of the country and advocate for the bill along with other projects that the association has been working on.

For the Stephens family, it feels like time is running out. With a number of World War II veterans and their spouses dying, Joseph said he wants to see veterans or their close family members receive recognition before their passing.

“We are not asking for a Purple Heart — just some recognition for these veterans,” Joseph said.

WATERVLIET — Police have identified the name of the man who went missing on the Paw Paw River Tuesday. Authorities... read more