Bobcats on to title game 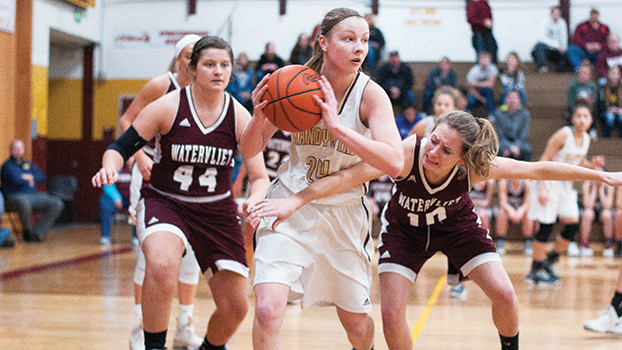 NILES — For the ninth straight year, the Brandywine girls’ basketball team will compete for the Class C District title.

On Wednesday, the Bobcats defeated a very tough and tall Watervliet squad, 47-36 to advance to Friday’s championship game against Hartford.

A team who is known for its striking outside shooting game, specifically on the 3-point arc, made only five of its 32 attempted shots. Head coach Josh Hood knows that going 33 percent from the field will not get his team far. But unfortunately, he isn’t left with many other options.

“You hear people who say we’re shooting too many 3-pointers. But when you’re (height) is 5-foot-7 and under, you’re going to have to shoot some threes.” Hood continued. “Watervliet is big and strong. We were laughing when our captains met with theirs. They were 5-foot-11, 6-foot plus. We were like midgets compared to some of their girls.”

Thankfully, the one thing that did fall in Brandywine’s favor was its defense.

His team buckled when it came to the in-your-face defense Brandywine brings to the court. Although they did fare well with the challenge in the first half, Watervliet didn’t continue to battle the Bobcats’ pressure the entire game.

“To beat a team like that, you have to be able to handle them for 32 minutes,” Forrester said. “We were right there with them in the first half, but we gave them too many points in the second off turnovers and that’s what has hurt us all year.”

Tied at seven after the first quarter, Brandywine had the 20-17 lead heading into the second half.

By the end of the third, Hood and his Cats could finally breathe a sigh of relief as the 31-21 lead entering the fourth quickly expanded.

Just seconds into the fourth, Nicole Sachman’s back-to-back baskets, and a 3-point shot from Megan Schmidt put the game far enough out of reach to seal the deal.

Sachman led all scorers with 13 points. No other player from either team hit double-digit scoring.

Tipoff for the title game is set for 7 p.m. Friday at Brandywine.

The winner will advance to the Class C regional tournament at Bridgman High School.

The Brandywine district winner will take on either Bronson or Union City at 7:30 p.m.