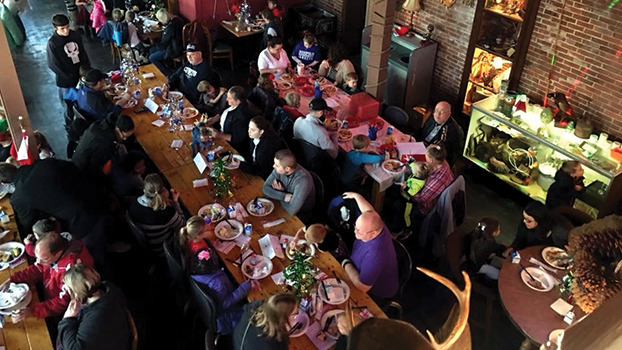 Turtle Lodge to host community event open to the public

CASSOPOLIS — Spreads of macaroni and cheese, pizza, chili, crackers and a variety of contributed dishes will be shared at a free event in Cassopolis to bring community members together.

At the Turtle Lodge from 3 to 7 p.m. on Saturday, March 11, Darin Boyles of Boyles Properties will host a community potluck in celebration of St. Patrick’s Day. Also contributing to the event is Marcello’s Pizzeria, which will be donating pizza.

“In the past, St. Patrick’s Day, Easter and days like that have been very popular,” Boyles said. “I think people are getting spring fever and they want to get out and do something. We started doing potlucks a couple of years ago and they’re for the community and they’re free. We only ask people to bring a dish to pass. Sometimes we’ll have live music that people volunteer or donate [their time to play]. This time, we’ll have karaoke.”

Door prizes will be raffled off, and Boyles will supply non-alcoholic beverages, popcorn and other basic food options.

The event is open to the public, including people who live outside of Cassopolis. In the past, they have had attendees from St. Joseph, Mishawaka and throughout the rest of Michiana. The potluck will take place in the lodge’s banquet room, which has a 25-foot-tall ceiling and a balcony.

The Turtle Lodge is the historic site of the original Cassopolis Courthouse built around 1860. According to Boyles, the banquet hall was added to the building in the early 1900s.

“I’ve been told that it was part of the Underground Railroad at some point, but I don’t know that for sure,” he said. “There’s a lot of mystery behind the building because I can find very few pictures of it from [the 1800s and 1900s], and no one seems to know much about it. I went to the history library there in Cassopolis and they were even like, ‘we don’t have that much information on that building.’”

The dress code for the potluck is casual and guests are not required to wear green, however, the lodge will be decorated for St. Patrick’s Day. Around 150 guests are expected to attend, but that number could be higher, as Boyles has not hosted a community event since last summer.

“It’s just a good way for the community to get out and meet each other and have a little bit of [fun],” he said.

Typically, Boyles tries to host a potluck as often as possible and plans to host another one in April for Easter. He has also donated the space to the League for Encouraging Empowerment, which will be hosting a Canvas and Cookies fundraiser from 2 to 4 p.m. on Saturday, March 24.  For more information about any of the events taking place at the lodge, visit its Facebook page.