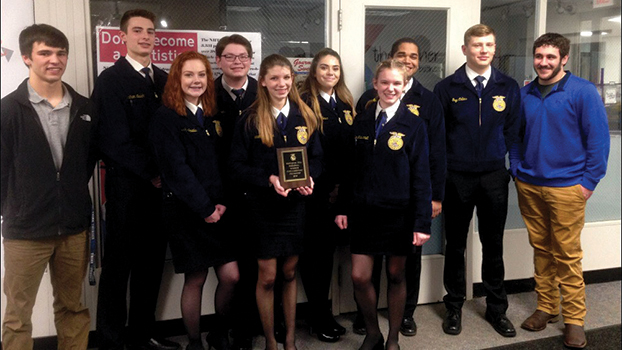 CASSOPOLIS — The FFA program at Ross Beatty Jr.-Sr High School followed up its dominating performance at the district competition with another strong showing at regionals, with one team and two students competing in individual events advancing to state.

Regionals took place at Branch Area Career Center in Coldwater, Michigan last Tuesday. Initially, the competition was scheduled for the previous Thursday but was moved due to weather.

The Parliamentary Procedure team, consisting of sophomores and a junior, took first place, while junior Madison Suseland and eighth-grader Elizabeth Merckx also won their respective public speaking events. In order to advance in the overall competition, teams and students needed to finish first or second in their competition.

“I think that they worked really hard and that they deserve to be going to state,” said Abby Asmus, the coach of the FFA team at Ross Beatty Jr.-Sr. High School. “I hope that they do well and, like I said last time, it’s just about building those life skills and bettering themselves as leaders. For me, that’s the main goal.”

The Greenhand team, consisting of all freshmen, placed third and is the first alternate, meaning if any of the teams in their region back out, they advance. No other Cassopolis teams or students finished in the top three.

Because there are so many FFA competitions going on at MSU that day, the events do not all happen in the same buildings. For instance, the parliamentary procedure team will compete at Erickson Hall, while prepared public speaking is at the Biomedical and Physical Sciences building. The distance between the competitions makes Asmus somewhat uneasy because she is not sure she will make it to all of her students’ competitions.

“It all depends on the timing because once one kid starts they seal the door so you can’t get in,” Asmus said. “That way there’s no disruptions during their speech or contest.”

In the meantime, the parliamentary procedure team, Merckx and Suseland will be getting ready to compete at state. They will do this by practicing their speeches in front of a variety of people in order to receive feedback.

The parliamentary procedure team will bring in people who have participated in the competition in years past, while the students competing in individual competitions will give their speech in front of agricultural professionals.

“They presented to a lot of different groups,” Asmus said. “They presented to Farm Bureau once and, hopefully, they will present to USDA this week — just so they get new questions and fresh ideas and they continue to get constructive criticism that’s not just [coming] from me all of the time.”

In order to advance past state, teams and individual students will need to win their competition, something both Suseland and parliamentary procedure team member Nick Prestly did last year when their Agricultural Issues team made it to the National Convention in Indianapolis. With any luck, they will be heading back there this year.

DOWAGIAC — To Dowagiac company Lyons Industries, employees are one of the most important parts of the business. “It’s all... read more