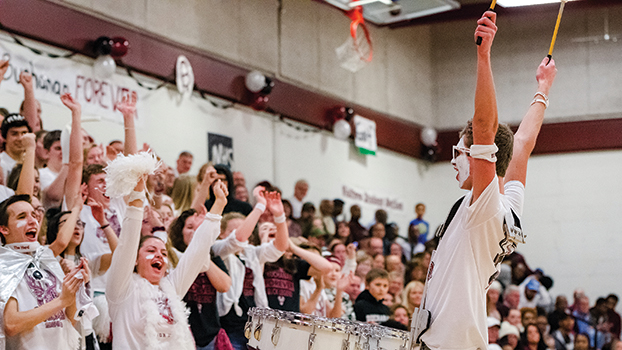 The Herd put on quite a show for the MHSAA during its visit Feb. 16. (Leader photo/TIMOTHY RITTER)

BUCHANAN — For the second time in its history, Buchanan’s The Herd is the Michigan High School Athletic Association’s Battle of the Fans VII champion.

The MHSAA announced the winner on Friday.

The Herd was one of three finalists for the cheering section competition.

Buchanan, which also won the title in 2013, was joined by Boyne City and Petoskey as finalists. Buchanan has been a finalist in the competition multiple times. The MHSAA and its representative council made its visit Feb. 16 when the Bucks hosted Berrien Springs in a BCS Athletic Conference Red Division contest.

“We saw again that the entire community of Buchanan gets behind ‘The Herd,’ and what students started six years ago is now part of the everyday culture of the school,” said Andy Frushour, MHSAA director of brand management and advisor to the Student Advisory Council. “Multiple classes of students have become part of this tradition, and Buchanan’s incredible level of student section support remains an example we can share with schools all over our state.”

Buchanan was named a semifinalist and advanced to the new social media “challenge round.” Following the MHSAA visit, a public vote was conducted on the state’s Facebook, Twitter and Instagram pages.

The student advisory council took into account the results of the public voting as well as using positive sportsmanship, student body participation, school spirit, originality of cheers, organization of the group, section leadership and overall fun as criteria for their final vote.

All the hard work and planning paid off for The Herd.

“It has been an amazing journey so far this year for The Herd,” said Jessica Cornelius, one of The Herd’s advisors. “Our students have worked so hard and to see all of that hard work pay off and translate into another Battle of the Fans victory is astounding. Our kids have such a sense of pride and accomplishment.”

The theme for this season was “No Place I’d Rather Be.”

“It couldn’t be more true,” Cornelius said. “Our kids truly love our school, our athletes, and our community. I also think there’s something to be said about not only winning another state title, but in being able to sustain our student section and stay relevant for five years. It’s not easy to stay positive and be present as a student section. To say we have been a Herd for five years strong, is something that speaks volumes about our students, staff, and community … and we look forward to supporting our students, athletics, clubs and community for years to come.”

“Winning BOTF means that all the hard work that the entire student body has put in paid of,” Schau said. “That by staying positive and leading your school in a positive direction has lead us to success which is really rewarding. This gives an example for not only our underclassman but others schools that if you work hard for what you want you can achieve it.”

“Winning BOTF gives me an incredible feeling,” Frosh said. “It’s awe-inspiring to think that we are supported by so many people, the community, the alumni and so many more who chose to vote for us. Knowing how fortunate I was to be one of the leaders during this year is humbling.”

The Herd will be recognized and receive its championship banner March 23 in East Lansing during the boys basketball state finals at the Breslin Center on the campus of Michigan State University.

EDWARDSBURG — What was expected to be a showdown for the Wolverine Conference championship turned out to be a blowout... read more