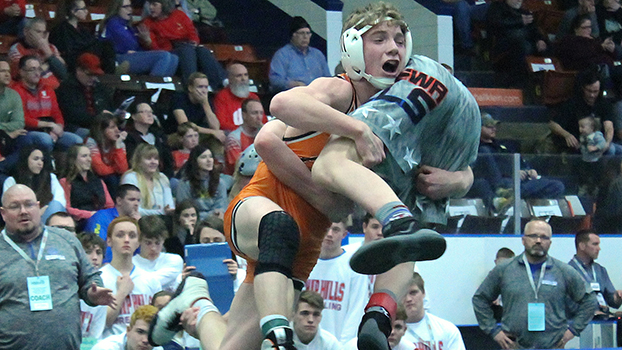 KALAMAZOO — The goal heading into the Division 3 state quarterfinals at Wings Event Center Friday afternoon was to beat No. 3-ranked Remus Chippewa Hills and advance to the semifinals.

Third-year Dowagiac coach Colin Burandt knew that bonus points were going to be a key in biggest match of the season for the Chieftains.

He also knew that no matter the outcome, this was just the first step for Dowagiac in its march toward returning to being one of the area’s top wrestling programs.

Bonus points turned out to be huge in Dowagiac’s 47-21 loss to Chippewa Hills.

The Chieftains, the No. 6 seed in Division 3, gave up five pins and a technical fall to the Warriors, who opened up the quarterfinal match by winning the first six bouts and building a 29-0 advantage.

“Ultimately, our goal was to just make it this year and to use it as a springboard to improve and gives us something to work on this offseason for next year,” Burandt said.

The experience Dowagiac got in winning the school’s first district title since 2015 and its first regional championship since 2004 is invaluable according to Burandt.

“Now the kids know what we are working for instead of us just telling them. It is hard for kids to understand that experience until they have had it,” he said.

That is when things got interesting.

Dowagiac (26-9) won four consecutive bouts, three by pins, to cut the Chippewa Hills’ lead to 29-21 heading into the 135-pound contest.

Dylan Elmore got the ball rolling for the Chieftains as he pinned Carson Hayes in 2:30 at 112 pounds.

“We were down 29-0 and we could have easily just folded,” Burandt said. “We did not. We could have easily lost every single match and went home, but the kids wanted to prove we belonged there and rattling off three straight points in that situation was big time.”

The Warriors (24-0) would win the final four bouts, two by way of pins, to close out the match and the season for the Chieftains.

Chippewa Hills advanced to Saturday’s noon semifinals match against No. 2 seed Richmond, while No. 1 seed Dundee faced No. 4 seed Whitehall in the other semifinal.