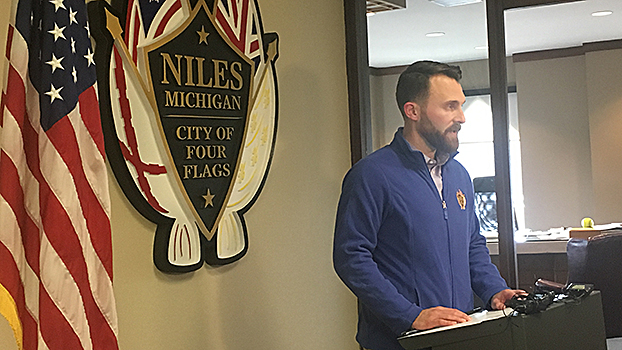 NILES — Donning rain boots and city apparel, Niles officials took a brief break from cleaning up Thursday to update the community on the historic flood that filled the greater Niles area this week.

During a press conference, Niles mayor Nick Shelton recapped the events leading up to and following the flood of the St. Joseph River, which crested at 17.3 feet Thursday morning — more than two feet higher than historical references.

As water levels have risen since Tuesday afternoon, emergency response teams have been involved in seven vehicle water rescues, but no injuries have been reported. Shelton said around 50 structures have been identified as flooded, including two apartment complexes in the flood zone.

“The Niles Housing Commission offered voluntary evacuation for the residents on the first floor (nine units), as a precaution,” Shelton said. “Only three households opted to be evacuated to a nearby hotel. A plan was developed to ensure 24-hour response should conditions worsen and necessitate mandatory evacuation.”

Niles Fire Chief Larry Lamb said The Kling Estates Apartment Complex at 718 Broadway St. were evacuated due to a collapsed wall in the building.

“There were 16 units. Fourteen were occupied,” he said. “We evacuated the entire building. We don’t know what the other portions of the walls are going to do.”

The city provided temporary housing for the residents displaced by the evacuation.

Numerous city buildings also sustained damage due to the flood, including Niles Dial-A-Ride Transit and the wastewater treatment plant.

“We did have some flooding into our wastewater treatment plant that shut down some of our operations, but so far, the crews are able to maintain and process the products,” said Niles Utilities Manager Jeff Dunlap. “At our Dial-A-Ride Transportation system (DART), we tried the sandbagging approach. It didn’t work. That building is flooded.”

Dunlap said DART services were relocated to the law enforcement complex, at 1600 Silverbook Ave. in Niles.

Once city officials learned of the projected flood Tuesday, crews began meeting with property owners to warn them of the impending weather conditions, advising them to prepare or depart their properties. In larger facilities, property managers or apartment complex directors were asked to share the information with the tenants. Shelton said text message alerts to city residents were sent out beginning at 3 p.m. Tuesday, Feb. 20.

Shelton said that while he knows citizens are curious and want to witness the historic flood firsthand, the water is dangerous and should be avoided. Instead, those interested in watching the flood unfold may do so by visiting the city’s website at nilesmi.org for drone footage of the affected area.

As the flood progressed Wednesday, many Niles residents questioned why sandbags had not been distributed to city residents and business owners to prevent the flooding.

“Properly filled and placed sandbags can be an effective way to prevent or reduce flood water damage, but due to the magnitude of this flood, sandbags would not have been unable to stop the flow and could have created dangerous water levels at nearby properties and farther into the downtown and neighborhoods adjacent to the river,” Shelton said.

During previous record floods in 1981 and 1988, the St. Joseph River flooded to just more than 15 feet in the city of Niles. Shelton said sandbags were filled and deployed then, but the barriers were breached both times, causing flood waters to fill even farther into downtown. Shelton said officials were avoiding similar results this year.

“Sandbags are basically for low-flow protection (up to two feet),” Shelton said. “Protection from high flow requires a permanent type of structure. Sandbag construction does not guarantee a water-tight seal and cannot be relied on to keep water outside a building.”

Nonetheless, the city is supplying sandbags upon request. Those interested in obtaining sandbags may do so by calling the city administration office at (269) 683-4700.

As water levels recede and officials begin more thoroughly assessing the damage in the coming days, city officials expect more challenges to surface. Lamb said the city is working in conjunction with the Berrien County Emergency Management Team to clean up the area.

After neighboring South Bend declared a state of emergency Wednesday evening, Niles residents questioned why the city had not done the same.

“In Michigan, a state of emergency exists when you have exhausted all resources, including manpower, financial resources — all of those things,” said Niles City Administrator Ric Huff. “At this stage in this incident, we haven’t gotten to that point. … The real expense is going to occur when flood waters start going away.”

Huff said the city may declare a state of emergency if all resources have been expended at the local level, but will not do so before they are out of resources.

Shelton said the city is working to organize staff and volunteers to clean up streets, infrastructure, parks and other public areas as water levels go down.

“While I cannot thank everyone personally, I would like to thank our city crews and staff, especially those who have been on duty since Tuesday morning,” Shelton said. “I would also like to thank the Red Cross, the Salvation Army, the Niles-Buchanan YMCA, the Niles District Library and area churches who have provided immediate emergency assistance every time we have reached out for help this week.”