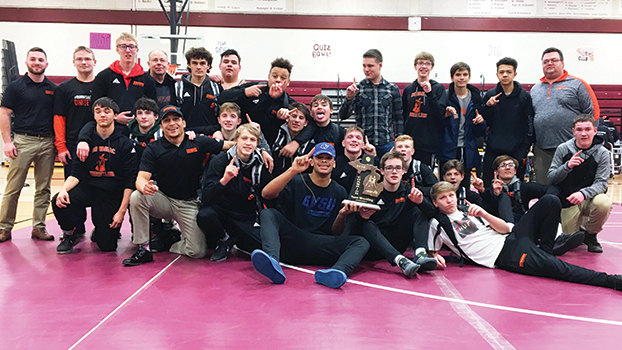 DOWAGIAC — A lot of things have changed since the Dowagiac wrestling team reached the state quarterfinals.

The Chieftains are making their first appearance at the final weekend of team wrestling since 2004.

In the 14 years since its last trip, the Michigan High School Athletic Association has moved the team state finals from Battle Creek to Central Michigan University and now to Wing Event Center in Kalamazoo.

Dowagiac has also had three coaches since that time, including third-year coach Colin Burandt, who has turned the program around.

When he arrived, Burandt faced a program that would not field a full 14 weight classes.

In 2017-18, not only did the Chieftains win their first district championship since 2015, it also won its first regional title in 14 years.

None of that history will help Dowagiac when it steps on the mat to face No. 3-ranked Remus Chippewa Hills in the Division 3 quarterfinals at 4:30 p.m. today.

The Chieftains will be facing a Warriors squad that is 23-0, and in the state finals for the seventh consecutive season and were state runners-up in 2016.

Chippewa Hills is led by seven seniors, a pair of juniors, three sophomores and a pair of freshmen.

“I did not really want the sixth seed. The fifth would have been nice, but either way we have to show up and wrestle,” Burandt said. “I think both teams are beatable and it is better than getting the seventh or eighth seed and getting Dundee or Richmond right off the bat. I like our chances. If we can get the match-ups that we want and we can keep it close then we could possibly win it.”

Dowagiac enters the state finals with a 26-8 record.

The Chieftains are a young squad as there are only four seniors in the probable starting lineup for the quarterfinals — Kody Walker (44-6), Gage Williams (8-4), Justin Lyle (41-9) and Caleb Murphy (4-2).

Williams returned to the wrestling team mid-season for Dowagiac, while Murphy decided to split time between basketball and wrestling again this season.

The Chieftains’ leading scorer on the basketball team, with an average of more than 11 points per game, will wrestle in the state quarterfinals today and then travel by car to Paw Paw where Dowagiac is playing a Wolverine Conference non-divisional contest at 7:30 p.m. today.

Chieftain boys basketball coach Danum Hunt understands what this means to not only Murphy and the wrestling program, but is apprehensive about the situation.

“This is a once-in-a-lifetime experience for him. I understand that,” Hunt said. “But because of where we are in the season with the state tournament coming up, this is pretty high-risk for us.”

Burandt and his staff have a solid plan for getting Murphy on the mat and then up I-94 to Paw Paw for the basketball game.

“Typically, our matches last an hour to an hour and a half,” he said. “Depending on what weight we start at, as soon as he gets done his mom (Tamantha) is going to be there. She is going to pick him up and get him to Paw Paw before game time.”

Burandt said that wrestling smart will be the biggest key to getting through to the state semifinals on Saturday against either No. 2 seed Richmond or No. 7 seed Alma.

“We cannot make any mistakes,” he said. “We have to stay off our backs and then score the points when we can because they are a very solid, technical team.”

Burandt has no real concerns about his team being overwhelmed by the magnitude of the state finals.

“I think our schedule will help with that,” he said. “We have wrestled plenty of tough teams. It will be business as usual. I do not think they (Chippewa Hills) are any tougher than a Niles or a Lakeshore or a team we saw down in Ohio. That will help. We will keep them ground and let them know that this is not any different than any other match.”

Admission is $8 for the quarterfinals and semifinals. Tickets are $10 for the finals, which begin at 3:30 p.m. Saturday.

An all-sessions pass is available for $25.

NILES — The regular season for Michigan girls basketball comes to an end this week and the postseason begins Monday... read more