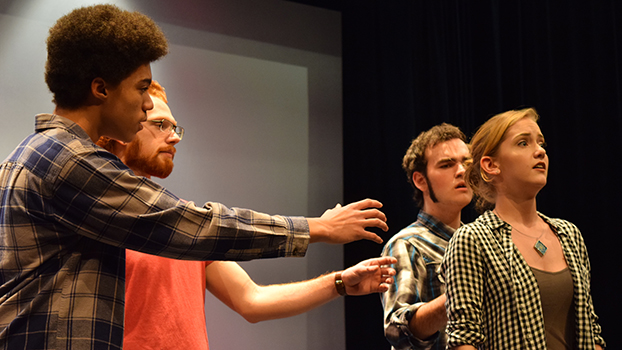 SMC to present ‘The Secret Garden’

DOWAGIAC — Southwestern Michigan College will present its spring musical, “The Secret Garden,” March 1 to March 4, at the theatre of the Dale A. Lyons Building on the Dowagiac campus.

She goes to Yorkshire, England, to live with her embittered, reclusive, hunchback Uncle Archibald (Zach Allyn) and his invalid son Colin (Braden Miesse, 11).

The estate’s wonders include a magic garden which beckons children with haunting melodies and “dreamers,” spirits from Mary’s past who guide her through her new life.

An ensemble of ghostly dreamers such as Aunt Lily (Janis Young), whose hidden garden Mary discovers overgrown with vines, rekindles memories shrouded by a scrim, an opaque gauze cloth until lit from behind.

Allyn, from Hastings, majors in music education, hoping to become a choir director after transferring to Grand Valley State University.

Smith works in SMC’s admissions office and tapped years of competitive gymnastics in last year’s “Chicago” to handspring across stage.

“Grief, forgiveness and renewal didn’t go away. They’re still here 100 years later and are things we need to talk about,” Young said.

Her character’s husband “is very depressed about loss in his life,” Allyn said.

“He thinks his son is dying, too,” Allyn said. “It’s a classic in my eyes, some of the best musical theatre I’ve heard. I’m very excited to be part of this because I love this show and have wanted to be Archie since middle school.”

“(Lucy Simon’s) music is really, really beautiful,” Young said. “I didn’t have any idea how beautiful it would be.”

“[Director of Choral Activities David Carew] is a big reason we’re here,” Allyn said. “I wanted to work closely with him. This college is unique in the way it takes care of students. I’m saving a lot of money going here for two years rather than straight to a four-year university. The level of teaching is the same, in my opinion. I love this place.”

Young, who performed in 2016’s “Disney’s The Little Mermaid,” said she became interested in musical theatre and singing later in life. She said before that, her interest was playing violin through high school.

“I wasn’t in my first show until fall senior year, but kind of knew what went on from pit orchestras for musicals,” Young said.

Smith described the play’s character, Mary, as sassy and brat like at times.

“The part I love most about her is I think it’s cover,” Smith said. “She just wants to be loved and to feel accepted and welcome. She wants to be normal again because her life turned upside down.”

“The music is amazing,” said Smith, who graduates in May, but will remain at SMC while attending Ferris State University. “I’ve completely fallen in love with it. I’ve been doing musicals since I was 11 (all four years of high school, Allegan Community Players and Parchment’s Kindleberger Park).”

“In one year, I went from playing (Hunyak, a Hungarian immigrant hanged for murder in ‘Chicago’) to a 10-year-old British girl. I’m transported into this character, feeling everything she feels,” Smith said. “I can relate to grief after losing my aunt and a friend. When the finale comes I’m on stage ready to cry because it feels so complete. This broken family finds their way in the end. How it happens is amazing.”